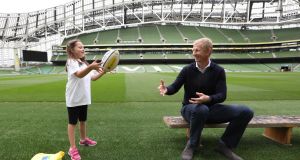 Leo Cullen has strongly indicated that Leinster will probably be obliged to rotate heavily during what is an unprecedented first two months of rugby after its planned resumption, and promised that the province’s hierarchy will take good care of their frontline players.

To his credit, Cullen is not inclined toward making excuses, and saw the positives in what seems like an inordinately intense schedule of big games.

Asked if this schedule was more challenging that even the previous two World Cup seasons he’s had to cope with, Cullen maintained: “Yes and no. From a fixture point of view yeah, but we find this period fantastic because it’s been so rare that we get a full season with all the players.”

He also cited the increased amount of one-to-one time the coaches have had with the players, and the players’ extended break from the game.

“But we’re good with the interaction in terms of rotation as well and we’ll continue to rotate the group,” said Cullen, speaking in his role as an ambassador with AsIAm, an organisation that supports autistic children throughout the country.

“It’s very competitive. It’s never like we’re asking the same players to front up for six weeks in a row. That doesn’t really happen. Guys get natural breaks during the course of the season. With competition comes rotation as well. So I think that will be similar for the international guys,” he said, suggesting Ireland may rotate a little more than normal as well.

“It may look, when you see all the fixtures down on paper, that it’s a lot of games but as is always the case there’s plenty of rotation within that and we’ll manage the players well,” said Cullen, with the start and end of the campaign in mind.

That said, there appear to be less “natural breaks” than normal, and it is perhaps an indication of his mindset that Cullen used the words ‘challenge’ or ‘challenging’ 16 times during the course of a half-hour long Zoom call from the Aviva Stadium.

Yet neither he nor Leinster would want it any other way.

“The flip side is that if you lose one or two games then suddenly you’ve got weekends off. We hopefully won’t have that many weekends off because we want to continue to win games,” he pointed out.

“I think it’s hugely exciting for everyone; players, coaches, supporters and sponsors. Even though there’s not that same access hopefully there will be record (TV) attendances in terms of watching the game because we know we won’t have record attendances here in the stadium itself.”

Helpfully, Cullen intimated that James Ryan will be back in another six weeks or so after the procedure on his shoulder, while winger Adam Byrne has a similar time frame. However he admitted that the “incredibly slow” recovery of Vakh Abdaladze’s back problem was a concern, all the more so given the likely Test demands on Tadhg Furlong and Andrew Porter.

No less than wanting some of his players making next year’s Lions tour, Cullen was supportive of the notion of Stuart Lancaster potentially being part of the coaching ticket.

Meanwhile, the Six Nations organisers have confirmed that, as expected, Ireland’s rearranged game at home to Italy will take place on October 24th while their concluding match away to France will be part of the round five programme scheduled for October 31st.

The latter will also feature Italy v England and Wales v Scotland, at a venue yet to be confirmed, though likely to be at Twickenham.

The Women’s Six Nations will be completed across those weekends and December 5th, with Ireland’s games against Italy and France to mirror the men’s matches. Alas, the Under-20s tournament, which Ireland led with three wins from three, will not be completed, with no team crowned champions for 2020. Ireland would have won the title by beating Italy at home.

The statement also confirmed that plans are afoot for the “unique eight-team competition, involving the Six Nations unions and two other international teams” to be held over four weekends in November and early December, and which are expected to feature Japan and Fiji.