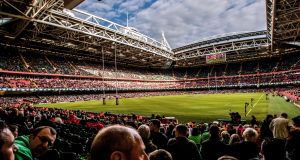 Principality Stadium in Cardiff. There are few if any better places in the world to enjoy a big rugby match. Photograph: James Crombie/Inpho

Descending from the valleys like red-clad wildebeest, they squeeze into Cardiff’s watering holes, cheek by jowl with friend and foe in heady anticipation of another great afternoon in the city’s rugby cathedral, one that dominates the city centre skyline from the west as it stands sentinel by the river Taff.

The train station, a middling punt away from the stadium, resembles a human ant colony on match days, while those travelling by air must negotiate the tiny confines of Cardiff Airport, International in name only, before making the 14-mile journey to join the vibrant pageantry that consumes the city when sport takes centre stage.

There is no refuge, no quiet corner and none is sought; everyone has read the small print and understands what the day and night will hold, happy to subscribe.

Watching the unrelenting human stream that flows between bars and seats throughout the game, pints ferried in holders that can carry six or eight at a time, offers a striking symposium of Brains and brawn.

It’s not for the faint-hearted, particularly after the watershed, the last remnants of the night often to be found in the “chip alley”.

The Principality Stadium has been rebuilt and rebranded liberally through the ages, previous iterations include the Millennium Stadium, the National Stadium, Cardiff Arms Park, the Arms Park or the Great Park (to give the venue its original moniker) but whatever name it carries, it is fundamentally a place of worship for rugby fans.

Soccer, boxing, rugby league, motocross, athletics, cricket, greyhound racing, even concerts have been occasional high-profile interlopers – Cardiff Lawn Bowls club has been in situ on the since 1923 – allowing the city to host a Commonwealth Games, several English FA Cup and League Cup finals, a Uefa Champions League final and world boxing title fights. But its soul belongs to rugby.

The stadium succumbed to flooding from the Taff at several points in its history and to the bombs of the Luftwaffe during the second World War that destroyed a stand or two and some of the terracing.

Up until the late Sixties, the national team and Cardiff RFC played on the one pitch before it was decided to construct a self-contained stadium within a stadium on the old cricket grounds that would house the club team. The original capacity of the National Stadium was 65,000 but was reduced to 53,000 following the Taylor Report post Hillsborough (1989).

The Welsh Rugby Union (WRU) soon realised that a further upgrade of facilities and capacity was required, completing the Millennium Stadium – the pitch orientation changed from east-west to north-south – in time for the 1999 Rugby World Cup; the new edifice became the second largest stadium in the world with a fully retractable roof. In September, 2015, sponsorship decreed a name change to the Principality Stadium.

That’s a potted synopsis of the bricks and mortar, a timeline of renovation that conveys everything and nothing. The stadium has always been about the people, irrespective of form, and has managed to retain the capacity to captivate the “first-timers”. If it weren’t for the gates it would be hard to distinguish the stadium perimeter from the narrow city streets, like Westgate or other access points like Castle Street and Park Street.

The city centre acts as a concourse for the stadium with its amenities including landmarks like the Angel Hotel – it was originally the Cardiff Arms Park hotel after which the stadium was named – or the Hilton Hotel, which has housed the Ireland team in recent times when staying in Cardiff, including for the Grand Slam-defining match in 2009.

It was where on the eve of that Grand Slam game Paddy ‘Rala’ O’Reilly the former bagman was bound, gagged, placed on a trolley and sent down in the lift, his journey to the lobby punctuated by stopping at each floor on the way down, all the while filmed by his giggling tormentors, the players.

The Irish team have had a variety of bases including Porthcawl, the seaside town about 25 miles up the coast with its world-renowned links course at Royal Porthcawl that was beloved of some non-playing members of the extended travelling party.

Newport was another base but in the professional era an aversion to the snarl of match-day traffic makes the city centre location the optimum choice.

For those Irish supporters who travelled to Cardiff from the late 60s through to the mid-80s, defeat was the staple diet; prior to Mick Doyle’s Triple Crown -winning team of 1985, the previous Irish success in the Principality was a 3-0 win in 1967.

The compensation for the visitors was to be able to witness first hand Welsh wizardry, particularly the storied halfbacks, in appearance akin to Subbuteo figures, small but perfectly formed; the outrageously gifted Barry John, Gareth Edwards, Phil Bennett, wing JJ Williams and fullback JPR Williams to name but a few offered the perfect accompaniment to those who worked at the coalface, including the famed Pontypool frontrow of Charlie Faulkner, Bobby Windsor and Graham Price. The wonderful number eight Mervyn Davies is another who could have graced any era.

It was fitting that Cardiff hosted the most famous Barbarians’ victory of all time, the 1973 win over New Zealand, piggybacking on the achievements of the 1971 Lions team that won the Test series against the All Blacks. Cliff Morgan’s soundtrack to Edwards’ marvellous try is undiminished by the passing years.

Then, as if the fates demanded a realignment of fortune in the Welsh-Irish tussles in Cardiff, the visitors won nine and drew one of 10 Five/Six Nations matches – the 1999 game was played at Wembley – between 1985 and 2003 before Wales arrested the sequence in 2005, when Mike Ruddock led them to a Grand Slam, clinching it with a 32-20 victory over Ireland.

Irish supporters enjoyed many celebratory moments, Noel Mannion’s 75-metre sinew-straining gallop up the touchline, one that raised the roof when there was none. Speaking of which, the stadium roof should have a tagline all its own, having induced more arguments than a Jeremy Kyle show.

On a more parochial note, the old press facilities in the Arms Park days were pretty rudimentary. One occasion it involved sitting in the pitch dark in the press box because it was the only place where the Dom Joly-esque sized mobile phone would manage a faint signal, adlibbing Murray Kidd’s column to a copytaker in the Sunday Press newspaper while “my guardians”, the rugby correspondents, Karl Johnston (Irish Press), Sean Diffley (Irish Independent), Kieran Rooney (Evening Herald) and Ned van Esbeck (Irish Times), waited impatiently to whisk me back to Newport.

It’s a slight exaggeration as Karl and “Diffo”, work for the day completed, would have been partaking in some non-scientific whiskey sampling,“Roons” checking the lager and/or beer, while Ned, a Pioneer and patient, pipe-smoking, perennial driver in the group, would have found a cup of tea and a quiet corner in the Cardiff clubhouse. There, in the company of the Guardian’s Paul Rees, they would discuss all things Arsenal.

These days the facilities are more conducive to work but the sheer volume of which ensures that the post-match relaxation process, the warming down, is of a more sedate variety.

One thing that brooks no argument is the atmosphere. The Welsh have a word, hwyl, which translates as “a stirring feeling of emotional motivation and energy” that is manifest in the singing at Welsh rugby internationals, a galvanising bond between the supporters and team.

Few would tire of listening to the Marseillaise in Paris but a rendition of Hen Wlad Fy Nhadau (Land of My Fathers) in Cardiff is an unforgettable experience that never disappoints; that always has been the case whatever the stadium set-up at the time. The Max Boyce ditty, Hymns and Arias has a tuneful, sing-a-long quality even to the non-believer.

It may be impossible to throw a stone and not hit a Welsh choir in the Principality and it’s therefore hardly a surprise that in moments of heightened emotion a first inkling is to open the pipes. The configuration of pitch and stands means that supporters are very close, fostering a slightly claustrophobic feel for the players.

Cardiff holds a very special place in the history of Irish provincial rugby as Munster won their two Heineken Cups there in 2006 and 2008, memorable triumphs against first, Biarritz Olympique, and then Toulouse. Leinster followed suit in 2010 with the remarkable Johnny Sexton-inspired second-half comeback against the Northampton Saints after their hopes appeared forlorn at the interval.

In between, Declan Kidney’s Ireland won the second Grand Slam in their history (2009) and in 2015 under the coaching baton of Joe Schmidt, an Irish team managed a first-ever victory over France in a Rugby World Cup match.

The collisions were brutal, feral and violent in intensity and as a contest it would extract a heavy toll from an Irish perspective. Jonathan Sexton, Paul O’Connell (his last game in the green shirt) and Peter O’Mahony missed the quarter-final defeat to Argentina because of injuries sustained in that match.

The sulphur from the pitch made its way to the stands, the noise levels deafening at times. Jamie Heaslip said: It was “an atmosphere which surpassed pretty much anything I’ve played in”. It proved a Pyrrhic victory but was still an experience that won’t be forgotten.

Much like Cardiff itself, a city that comes alive on big match days, with the stadium as its focal point; there are few if any better places to enjoy a rugby match.