Taxi drivers fear 20% will be out of business within year 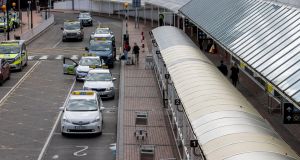 Taxi drivers estimate business at Dublin Airport is 10 per cent of pre-Covid levels and business during the day is 20 per cent, while nighttime and weekend business is 2 per cent. Photograph: Tom Honan

An estimated 20 per cent of taxi drivers would be out of business within the next 12 months without additional government support, representatives from the sector have claimed.

Taxi drivers estimate business at Dublin Airport is about 10 per cent of pre-Covid levels and business during the day is about 20 per cent, while nighttime and weekend business is about 2 per cent.

Speaking before news of the new government package of supports emerged, Jim Waldron, spokesman for the National Private and Hire Taxi Association, said it was difficult to predict what would happen to the sector. However, he expected drivers would be forced to leave the trade due to a lack of business.

“I’d say over the next 12 months, if we don’t get any financial support from the Government, by this time next year we could probably have 20 per cent less taxi owners,” he said.

He added this would particularly affect those of pension age, approximately 23 per cent of the total industry.

“People who have a pension at the moment, they live on their pension and go out to work to pick up a handy few quid. But if you’re going out at rush hour now and only getting one job, that one job will only pay towards the licence and the upkeep of the car so I think they [pensioners] will fall away quicker.”

Mr Waldron called on the Government to stop the issuing of new taxi licences and to provide grants, as well as “step-down payments” for drivers who were going back to work.

He also called for an extension to the age limits for vehicles used as taxis and for the Government to introduce a licence buyback scheme.

Vinny Kearns, chief executive of NXT taxis, said he was already aware of “many” drivers who had decided driving taxis was no longer viable.

“Already . . . many taxi drivers had substantial mortgages, young families, loans. I know myself that many drivers who had heavy goods vehicles licences returned to driving trucks. Many of those will not return to driving taxis,” he said.

“At the moment, drivers are worried about if they can make a living, if it’s a wise thing to do to come off the Covid [payment], should they look for another job.”

The National Transport Authority, which regulates taxis, said it “recognises the devastating impact which Covid-19 has had” on the industry.

While it is not responsible for the administering of grants for the sector, a spokesman said it had implemented mitigation measures “within its regulatory powers” to provide assistance, such as the removal of delayed renewal fees and the suspension of licences during the restrictions.

The spokesman added figures were not available for the number of people who have already left the business due to Covid-19, as only a licence surrender indicates this “indefinitely”.