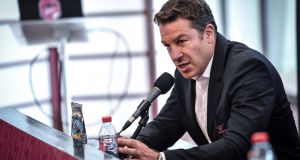 Stade Francais CEO Thomas Lombard: “We decided that it was wiser to stop everything and place everyone in isolation until August 17th.’ Photograph: Stephane de Sakutin/AFP/Getty Images.

Following an outbreak of Covid-19 in the Stade Francais squad last week that forced the cancellation of a pre-season friendly with Brive, the Perpignan and US Carcassonne game has also been postponed.

The French media are reporting a US Carcassonne forward tested positive with at least 10 contact cases detected at the club.

L’Equipe is reporting that 25 positive cases among Stade Francais staff and players forced the Parisian club to abandon their training camp in Nice.

Ireland are scheduled to complete the 2020 Six Nations at Stade de France on October 31st. Players at Agen and Lyon have also previously tested positive.

“A player or a member of the staff probably contracted the virus a few hours or a few days after our departure for Nice on Tuesday,” Stade Francais general manager Thomas Lombard told La Parisien. “We had tested them the day before, they were all negative. But the problem is that there is a period of time between contamination and detection of Covid-19.

“We tested them again in Nice and afterwards we still had doubts about a player who was then put in isolation. His test was positive, and we had other positive cases in the aftermath. We then decided to bring the team back independently and confined to Paris on Wednesday (August 5th). Then, we put the group to rest until Monday morning when new tests showed that there were other cases. With the health authorities, we then decided that it was wiser to stop everything and place everyone in isolation until August 17th.

All training has stopped as the entire Stade playing squad and coaches are in solitary confinement at least until Monday.

“We only have asymptomatic cases among the players and the staff,” Lombard added. “So the priority here is to protect those who are negative from contamination. We will redo tests Thursday or Friday in order to be able to get the players out of isolation on Monday, where we will do more tests for a possible recovery.

“I know it’s not pleasant, when it’s 38 degrees in Paris, to ask the players to stay locked up and not see anyone, but it’s the only solution to stop spreading it.”