Varadkar expects funding for businesses in Kildare, Laois and Offaly to be announced soon 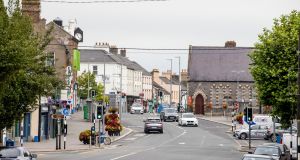 A general view of Naas in Co Kildare, one of three counties where movement restrictions have been imposed to try slow the spread of Covid-19. Photograph: Tom Honan/The Irish Times.

Imposing two weeks of movement restrictions in Laois, Offaly and Kildare in response to a spike in Covid-19 cases was not “a blunt instrument” to deal with the issue, Minister for Health Stephen Donnelly has said.

Mr Donnelly said that if this sort of measure had not been introduced for a period it was “entirely possible” that similar restrictions would have had to be imposed elsewhere in the State again.

He said restrictions had been put in place to save lives, to protect vulnerable people and the local economy. If the Government had not reacted as quickly as it did, the virus could have spread “around the country” and “we would have been right back at the beginning”.

The Minister told RTÉ’s Morning Ireland that it was important to move as quickly and as locally as possible in response to the increase in confirmed cases, many of which related to people working in the meat processing sector.

More than 300 additional cases of Covid-19 have been recorded in Co Kildare in the past fortnight, according to figures provided by the Department of Health earlier this week. The 14-day incidence of Covid-19 in Co Kildare stood at 138.4 cases per 100,000 of population on Monday, almost eight times the national average. The rates in Laois and Offaly were also multiples of the national average.

The response of the Irish people in the pandemic to date has been “nothing short of spectacular”. The data showed that despite the clusters, the level of community transmission in the State has been very low, he said.

“We could be looking at this for nine months to two years before a vaccine comes through so we need to be fully transparent with people.”

Tánaiste Leo Varadkar said the Government’s intention was to announce economic supports for the Midlands counties that are under the localised lockdown this week, perhaps as soon as Thursday.

He said businesses have told him they want funding for marketing campaigns to offset some of the reputational damage that has been done, with many in the three counties feeling retail, travel and hospitality sectors will be hurt as people will be slow to return to the areas.

“We’re going to help to counteract that, perhaps through marketing funds and other things,” he said. “As they pointed out to me, that if we can impose local restrictions surely we can have some additional local investment and financial support for business.”

World Health Organisation (WHO) representative David Nabarro said that localised lockdowns are going to be more frequent in the future and the public is going to have to learn to live with the constant threat of the virus.

He told RTÉ radio’s Today with Sarah McInerney show that the question of how much of an area should be focused on to supress the spread of the virus would evolve over time. The authorities will go for a wider area at the beginning, but over time “as we get more sophisticated” the area will narrow, he said.

The National Public Health Emergency Team (NPHET) is to meet on Wednesday to review the latest trends on Covid-19. The meeting comes after 35 new cases were reported on Wednesday, the lowest number of daily cases in almost a fortnight.

On the issue of localised lockdowns, Prof Mary Horgan, president of the Royal College of Physicians Ireland, said public health authorities would have to link in with businesses and the local community rather than “broad brush strokes” on a national or by county basis.

She said the situation in the Midlands provides an opportunity to look at all the information gathered over the 14 days of restrictions, which will have “huge implications” for the people of the three counties.