‘We went away to France in round two last year and got beaten . . . We go away to Lyon this year and can we be better?’ 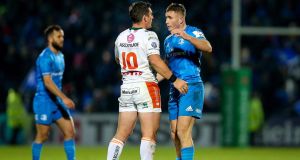 Leinster head coach Leo Cullen hailed his returning international contingent after their 33-19 bonus-point victory over Benetton Rugby in their Heineken Champions Cup Pool One opener at the RDS.

Last season’s beaten finalists welcomed back a number of players who featured for Ireland at the World Cup, including hat-trick hero Garry Ringrose and captain Johnny Sexton, who also touched down and kicked three conversions.

“Off the back of what a lot of guys have been through, trying to come back in, it’s like their season is starting again. In many ways, it’s round one for us as an entire squad.

“We still have a couple of more guys that are still yet to appear. Overall we’re pleased. It wasn’t perfect, far from perfect, but it’s a win. We’ve got the job done in many respects.”

Although Leinster were always able to stay at least 12 points clear after the break, Cullen sounded a warning ahead of next weekend’s trip to Top 14 pacesetters Lyon.

Having served up a first-round demolition to Wasps in last season’s tournament, they subsequently fell short against a rejuvenated Toulouse just nine days later.

The Leinster boss is eager to avoid a repeat performance in France next Saturday, adding: “We went away to France in round two last year and got beaten by Toulouse. We go away to Lyon this year and can we be better? That’s the question we’re asking ourselves.

“The challenge is the fact that we’re not really up and running with this group yet. I think everyone thinks, ‘Okay, the group is going well’, but the Pro 14, as we know, is very different to the challenge of Europe.”

This game was a homecoming of sorts for Benetton outhalf Ian Keatley. A product of the Leinster academy, the Dublin native went on to represent Connacht and Munster before making the switch to the Crowley-coached Treviso outfit.

Keatley felt a lack of killer instinct played a part in his side’s downfall, saying: “European Cup nights in Ireland are something special, especially in Thomond Park and the RDS. It was a great atmosphere out there.

“Kieran said we were coming with a positive attitude and that’s why we went for the corner early on and that gave us confidence when we scored.

“If you give Leinster access to your 22 they are quite clinical, as they showed. We got into their 22 and we weren’t clinical. That was the difference.”