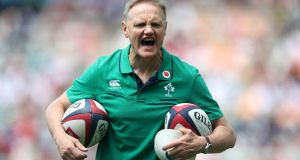 Former Ireland head coach Joe Schmidt in his new book Ordinary Joe reveals the difficult calls he had to make for the World Cup and his regrets. Photograph: Ryan Byrne/Inpho

A potential six-week suspension for Devin Toner was a contributory factor in the decision not to include the long-serving Leinster and Irish lock in Ireland’s 31-man squad for the 2019 World Cup, according to Joe Schmidt.

The former Ireland head coach reveals that the Irish management had been alerted that the citing commissioner was looking at a late incident in Ireland’s 22-17 win over Wales in Cardiff, when Toner made shoulder contact with a prone Rob Evans, the day before submitting the squad to World Rugby.

“We hadn’t noticed the incident at the time, but we reviewed the incident and it didn’t look good,” writes Schmidt. “We had been warned by Alain Rolland, in his presentation to us, that any shoulder-to-head contact was likely to have a starting entry point of a six-week suspension. It was a difficult call, but we decided to go with Tadhg Beirne, who can play both secondrow and backrow, and Jean Kleyn, the only specialist tighthead-scrummaging secondrow in the squad.”

There were other difficult calls and conversations, in omitting Jordi Murphy, Tommy O’Donnell and Kieran Marmion, “but we opted for Luke [McGrath ahead of Marmion] on the strength of his kicking game”.

Injuries had contributed to several of the above missing out, and likewise with Will Addison, not least as “durability is a factor we need to consider. But I feel miserable for those who miss out.”

The selection of Schmidt’s final squad after six years as Ireland head coach is contained in the fourth and concluding section, “RWC Diary” of his book Ordinary Joe, which is published by Penguin and goes on sale today at €25.

Although not an autobiography, part one is devoted to growing up in New Zealand as the third of eight children in Kawakawa, te Aroha and Woodville in the country’s north island. This section also goes through his playing career and coaching career in New Zealand.

One ventures that Schmidt chose this format as not only did it leave him in control of the manuscript, it was also the most time-efficient approach.

Overall, it is an insight into the fascinating personality of the man who has been the single most influential figure in Irish rugby over the last decade, or probably any other decade for that matter.

The book also gives ample evidence of his restless mind, his obsessive attention to detail and his all-consuming addiction to every aspect of the sport; not least the multiple issues which can prove a distraction off the pitch. The media is a recurring and obvious one.

You also have a sense of Schmidt becoming agitated by other uncontrollables, from the state of the training pitch at their first session which contributed to Rob Kearney straining his calf and Robbie Henhaw damaging his hamstring, to the pitch for the Samoan game, when he sought to have referee Nic Berry prematurely end the game.

Schmidt had only three hours’ sleep after the relief of the opening 27-3, bonus-point win over Scotland. Interestingly, he sensed that the Japan game was “a hard sell” after Ireland’s two big wins there in 2017 and their respective opening performances.

He hardly slept after the Japan defeat due to “the knot in my stomach”. Even so, his review is disappointingly slight, beyond admitting that Ireland had lacked the same tempo and energy as Japan in the second half.

Ironically, Gardner is not mentioned by name here, but Schmidt’s grievances over the officiating were re-enforced when the coaches reviewed the game. Subsequently though, Schmidt admits he was “disappointed with myself for mentioning the feedback from World Rugby” which confirmed three of four offside calls against Ireland were wrong, as it was in confidence and this was something he’d always respected.

Ultimately, given the chance to do 2019 all again, Schmidt admits he allowed the World Cup to become too distracting from the start of the year.

After painstakingly reliving the 46-14 quarter-final defeat by New Zealand which ended Ireland’s World Cup and his six-year tenure, Schmidt admits that on a broad level he allowed Ireland’s approach to become too dominated by the desire to break the World Cup quarter-final glass ceiling.

Penning his final diary entry from his home in Churchtown on Sunday, November 3rd, the day after the World Cup final, Schmidt writes: “We didn’t prioritise this year’s Six Nations and I think that was a mistake. It doesn’t mean that we didn’t prepare and focus on each game, but we had a longer-term priority and I think that it diluted the rhythm that we’d built over the previous five years. What we were good at was building towards and committing to the habits that helped us to be accurate and connected on the pitch.”

Schmidt received a text after the quarter-final from a key member of the All Blacks’ World Cup 2007 programme to illustrate how they’d made a similar mistake then in ultimately losing in the quarter-finals to France.

Using the example of France stumbling through to the 2011 final and then very nearly beating the All Blacks in Auckland strengthens Schmidt’s belief that World Cups are “very difficult to predict and just as difficult to prepare for”.

He also concedes: “Our performances did not have the consistency of 2018; our levels of accuracy and cohesion fluctuated from game to game, and during games. On reflection, I don’t believe that you can afford to taper and peak: you have to be building all the time, and that is done training by training, and performance by performance.”

The unpredictable knockout stages of World Cup re-affirmed Schmidt’s view “that the margins are very fine and repeatability of performance is key in any competition”.

“Our level of performance slipped as we started to look too far ahead, and we couldn’t just step back on to the pitch and play with the same level of accuracy, cohesion and confidence. I think the players will build from the defeat to a very good All Blacks team. But when looking more broadly at the RWC, I think there’s a danger in becoming too focused on delivering one-off performances at the end of four-year cycles; that it is more about having a growth mindset on a weekly basis to improve player capability, build team cohesion and strengthen the squad’s identity.”