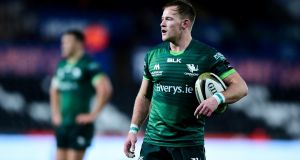 Kieran Marmion has signed a new deal with Connacht until 2023. Photograph: Ryan Hiscott/Inpho

Kieran Marmion has signed a new contract with Connacht until 2023, ending any speculation over the Ireland scrumhalf’s future.

27-year-old Marmion missed out on Ireland’s Rugby World Cup squad and had been linked to a move away from Galway, with Saracens among his reported potential suitors.

However he has committed his future to The Sportsground, agreeing a three-year contract extension with the province.

Academy graduate Marmion has been capped 27 times for Ireland since making his debut against Argentina in 2014, and Connacht boss Andy Friend believes retaining his services is a big boost for the province.

He said: “Kieran has been an outstanding player for Connacht and for Ireland. He is a diligent professional and through his hard work he has progressed through the Connacht Academy and on to play for Ireland.

“His progress demonstrates the support that is available to players through our academy pathway. Kieran’s commitment to Connacht for a further three seasons demonstrates his ambition to contribute at provincial and international level in the coming years.

“His signing also ensures that we continue to retain a squad equipped to compete at the highest level of European club rugby”.