Final countdown: Paddy Johns was a Saracens standout, on and off the pitch 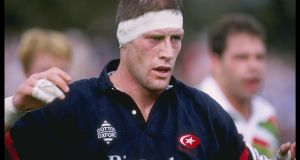 Paddy Johns in action for Saracens during a match against Leicester at Enfield in August 1996. Photograph: Dave Rogers/Allsport

The greening of Saracens Part II

Former Ireland captain and secondrow Paddy Johns was highly regarded during his three years at Saracens, not just by the supporters but club owner Nigel Wray. The Dungannon dentist, who won 59 caps for Ireland, 10 as captain, between 1992 and 2000, was a tough, uncompromising player on the pitch and a quietly spoken gentleman off it.

He was part of a Saracens team that included South Africa’s World Cup-winning captain Francois Pienaar, another World Cup winner in Australia’s Michael Lynagh. There was also the England duo of Richard Hill and Skerries-born scrumhalf Kyran Bracken and legendary French centre Philippe Sella among other rugby luminaries.

Speaking ahead of Saracens’ defeat to Toulon in the 2014 European Cup final – the club would go on to win the trophy twice since then – Wray observed: “I think if you asked any other Premiership club, they would say Saracens are a team. That’s what we got wrong for many years.

“In 1998 we won the [English] Cup and we almost won the league. I think the failure was that we didn’t understand why. It was because we had very good people – Francois Pienaar, Philippe Sella, Kyran Bracken, Paddy Johns, Michael Lynagh – these weren’t just good players, they were very good people and we didn’t actually get that. We then stuttered for the best part of 10 years.

“We now definitely have a culture whereby everyone matters from the kit man [up], and everybody’s family matters.”

Johns came back to lead Dungannon to an All-Ireland League Division One title in 2001, the first Ulster club to manage that feat, before calling time on his career as a player the following year.

The first time that Leinster and Saracens met in a Heineken Cup match was in the 2010-2011 season when the clubs clashed in the second round of pool fixtures, with the Irish province emerging triumphant, 25-23, at Wembley Stadium.

A number of participants that day are likely to be in action again at the weekend. Saracens fullback Alex Goode crossed for a try and kicked four penalties that day – outhalf South African Derick Hougaard chipped in with a brace of penalties – while Brad Barritt was in the centre, Richard Wigglesworth at scrumhalf and hooker Jamie George among the replacements.

Rob Kearney was fullback for Leinster, Devin Toner started in the secondrow, Seán O’Brien at blindside flanker while Leinster’s head coach Leo Cullen and Fergus McFadden came off the bench.

The outstanding performance on the day, though, belonged to Johnny Sexton.

The Lions, Ireland and Leinster outhalf scored all 25 points with a try, conversion and six penalties in a man-of-the-match display. The Irish province went on to win that title, Sexton once again a lavish contributor with another man-of-the-match performance in the final, the come-from-behind epic win over the Northampton Saints; his personal tally this time was 28 points.

There are still tickets available for Saturday’s Champions Cup final between Leinster and Saracens on various sites with the cheapest that this column has come across at €44 up to an eye watering €710. Over 50,000 tickets for the game have been sold for the Newcastle venue with a capacity of 52,405.

For those who are still thinking of travelling to Newcastle, Joe Walsh Tours offer a luxury coach/ferry option that leaves from Dublin Port at 0.15am on Saturday morning and heads for Newcastle via Holyhead, returning on the Cairnryan to Belfast ferry on Sunday morning with a coach transfer to Dublin that gets in about 10.30am on Sunday morning. The price is €239 and if a match ticket is required it will cost an additional €100 and has to be pre-paid.

Killester Travel have a one-night trip with flights from Dublin to Newcastle, coach transfers, hotel and breakfast for €675 plus €65 taxes and for those requiring a match ticket there is an additional cost of €100. Their day trip is sold out.

The number of Champions Cup matches that Saracens have won this season. Mark McCall’s side are looking to become the first club in the history of the tournament to go through two Champions Cup seasons winning all nine matches.

“It is going to be a fascinating battle. You have so much respect for Leinster, remembering how they did us in the quarter-final last year. They are well coached and well led by Johnny Sexton, but it is the little things with them, how quickly they get off the ground and how hard they work.” – Saracens and England scrumhalf Richard Wigglesworth.