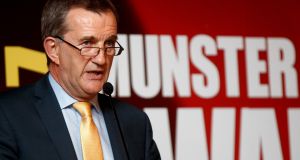 Garret Fitzgerald: it’s doubtful if any single person has given more to Munster rugby during the professional era. Photograph: James Crombie/Inpho

Tributes from around the country and indeed the world of rugby have poured in for the former Munster chief executive Garrett Fitzgerald, who passed away on Friday following an illness.

Fitzgerald retired as the Munster CEO last year after fully 20 years in the post, having been appointed in 1999. During that time Munster won two Heineken Cups and three titles in what is now the Pro14, and Fitzgerald oversaw both the redevelopment of Thomond Park and Musgrave Park as well as Munster’s move en bloc to Limerick and their high performance centre in UL.

Born in Knockraha, Co Cork, Fitzgerald attended Christian Brothers College, where he won a Munster Schools Senior Cup during the 1970s. During an 18-year playing career in rugby union, Fitzgerald played in the front row for UCC and Cork Constitution.

Fitzgerald coached CBC to five Munster Schools Senior Cups, as well as working with the Irish Universities, Munster Under-20s and UCC before coaching Munster for three years at the beginning of the 1990s, the highlight of which was the province’s 22-19 victory against then-world champions Australia in Musgrave Park.

A personal favourite was how Garrett beamed with joy on the day Munster presented Anthony Foley as their newly promoted head coach. His pride in Foley’s rise was palpable.

In an interview with The Irish Times four years ago, Garrett admitted: “I was heavily involved with rugby in Munster before I ever got paid to do it. So it isn’t as if I came in from the outside. I feel part of it. So I would nearly feel the same responsibility if I wasn’t getting paid for it.”

It’s doubtful if any single person has given more to Munster rugby in the professional era and it’s undoubtedly the case that no-one did so with more positive intentions and good nature than Garrett. He invariably returned calls and treated all questions with utter equanimity, charm and good humour.

There have been so many moving tributes to Garrett since Munster Rugby confirmed his passing on Friday night in a statement which expressed “great sadness” at his death as well as deepest sympathies to his wife Áine, children Megan, Jamie and Michael, and the extended O’Donnell-Fitzgerald family.

The province’s statement assuredly spoke for all in the organisation when simply concluding: “We are heartbroken.”

So, so many people in Munster have been affected by Fitzgerald and now his untimely passing, just as he should have been beginning a long and deserved retirement after those years of unstinting service to Munster rugby.

As their former hooker and assistant coach Jerry Flannery wrote on twitter: “Since I was 18 years of age Garrett was a consistent positive influence on my life. What he has done for @munsterrugby is incredible. He lived the values of the province, always putting people first. A truly great man, he will be dearly missed.”