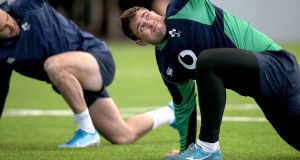 Dave Heffernan is among those players who have returned to the Ireland squad. Photo: Bryan Keane/Inpho

Farrell has recalled the 13 players he released to the provinces last week so that they could get game time in Guinness Pro14 fixtures over the weekend. Connacht hooker Dave Heffernan and Leinster flanker Will Connors won respective man-of-the-match awards in their teams’ wins over the Cardiff Blues and the Cheetahs respectively.

Centre Chris Farrell and flanker Jack O’Donoghue played 80-minutes in Munster’s 68-3 victory over the Southern Kings. Heffernan was a try scorer in his 61 minutes on the pitch while Ultan Dillane was on for the duration of Connacht’s 29-0 win against the Blues at the Sportsground.

Stuart McCloskey (80), Billy Burns (52), Jack McGrath (40) and Tom O’Toole (40) all featured in Ulster’s defeat to the Ospreys. The remaining 23 players took part in a two-day camp in Cork last week under the auspices of the Irish coaching group. The team to face England will be announced on Wednesday.