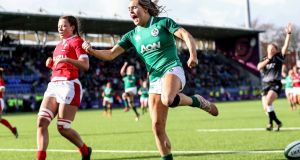 After scoring impressive tries in both of Ireland’s opening Women’s Six Nations wins, Beibhinn Parsons will be unavailable for the rest of the tournament due to preparations for her upcoming Leaving Cert.

The 18-year-old Ballinasloe native was the standout performer after she ran the length of the pitch against Scotland and then followed it up with a mazy run through the Welsh defence just over a week ago.

“It’s been a couple of big weeks for Beibhinn, but we spoke to her and came up with a plan at the start,” Ireland head coach Griggs said.

“Her studies are very important so we’ll be giving her the time off and she’ll concentrate on her Leaving Cert and come back to us in the summer.”

Ireland face into their first away match of the campaign this Sunday when they face England at 12.45pm in Doncaster and they will be without Parons but Katie Fitzhenry is included in the squad after returning from the Sevens World Series in Sydney.