Ireland Under-20s have their own Grand Slam party to spoil 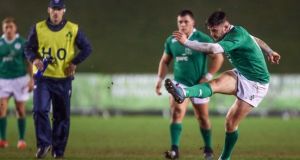 Nigel Carolan’s men fought-back from 14 points down in a thrilling eight try encounter, but the hosts rallied to end their grand-slam dreams.

England claimed their fourth bonus-point win of the tournament against Scotland to match the seniors and take the title with a week to spare.

But outhalf Bill Johnston, who kept his side in-touch with 12 points from the boot, is desperate to spoil the celebrations when they meet at Donnybrook next weekend.

He said: “We’re bitterly disappointed to come away from here without the win, but now we’re all looking forward to getting home and delivering a performance in-front of our home fans.

“England will be coming over to celebrate their title but our aim is to spoil the party and show just what we can do.

“They’re a good side but next week is about us and what we can do, especially with it being St. Patrick’s day.

“Our defence wasn’t good enough, we were slipping off tackles and fair play Wales punished us, the fightback showed the character in the team but in the end it wasn’t enough.”

Captain Calvin Nashscored to put his men on the front-foot, before Wales reacted with tries from Corrie Tarrant, Dane Blacker and Williams.

But outside-half Bill Johnston kept them in-touch from the tee before Joey Conway and Paul Boyle levelled the scores.

Williams showed why he is being touted as the next start off the Ospreys production line though to score his second try to wrap-up the bonus-point triumph before they made sure of victory through replacement Jack Pope.

England matched their senior counterparts as they retained the Six Nations title with a bonus-point victory over Scotland.

“This is a team that never gives up and we saw that with the way we fought back, it was just a shame we couldn’t finish the job,” added Johnston.

“But we’ll learn from this defeat and come back stronger against England next week.

“We were probably a bit surprised that Wales didn’t kick the ball more, but we let them into the game with our defence.

“But fair play to them, they took their chances well, and we’ll learn and hopefully we can spoil the party next weekend.”