Last year at the RDS, he was playing for Leinster. Now the boot is on the other foot 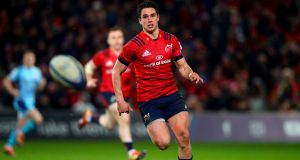 A year ago, when Leinster hosted Munster in the Guinness Pro14 semi-finals at the RDS, Joey Carbery was playing full-back for the home side. Exactly a year on, with the same match-up and same prize at stake, Carbery is in line to return to the RDS for the first time in the iconic Munster “10” jersey.

He admits the thought of it is a little strange.

“Yeah, it is. It’s funny. Last year’s game was a great atmosphere. There was such a buzz around it and hopefully this year it’s going to be the same.

“Some of them would be really good mates of mine,” he says of his former teammates, “but at the end of the day I’ve got to go out and do my job and I’m doing it for the side I want to be doing it for. It’s hugely exciting. Playing in the semi-final of the Pro14 is huge – it doesn’t come around every day.”

While he’s played against Leinster in the Aviva last October, Carbery is not going to lie: going back to the RDS is special for him. “I am really looking forward to it, to be honest. It will be weird being in the other dressing room but no, I can’t wait to get out there.”

Of his 37 games for Leinster, 14 were at the RDS, of which he was on the winning team a dozen times, the two exceptions being the Pro14 semi-final loss to Scarlets two seasons ago, and a defeat by Benetton last season.

But a 20-8 win against Benetton in September 2016, his first Leinster start, remains his favourite.

“I scored two tries. That was pretty special. It is probably the one that sticks out the most.”

It maintained a trend, for Carbery also scored tries on his full debut at both Musgrave Park and Thomond Park in last September’s wins over the Ospreys and Ulster. There have been other stand-out games for Munster along the way since, notably the home win over Leinster, that virtuoso 26-point Man of the Match performance away to Gloucester, and holding his nerve to kick the winning points against Exeter in January.

Alas, a hamstring tear picked up during the Six Nations has limited him to just one appearance since helping to inspire Ireland’s win over Scotland off the bench in February, which was also at Murrayfield in the Heineken Champions Cup quarter-final on March 31st.

Even then, Carbery only lasted 36 minutes after his hamstring tweaked again.

“It’s been a frustrating couple of months. Hammies are quite niggly and so there were stages when I was going good, then going bad, and it was hard to call.

“I made a pact with the physios that I wouldn’t play until I was 100 per cent. So I’ve been training the last couple of weeks and it feels pretty good. Hopefully now I’ll get through this week and, if I’m lucky enough to be selected, then I’ll be okay.”

If so, it will be only the eighth time he will start alongside Conor Murray, but, while rusty, he goes into this game with his streak of 23 kicks out of 23 still intact.

Certainly Carbery has nailed his colours to the Munster mast by extending his stay so soon into the first of an initial two-year deal. It was, he said, a very easy decision.

“I love it down here. I love the people, they’ve made me feel very welcome and I’m loving playing rugby down here as well. The potential is roof-less – we can get wherever we want to. It will take work, it will take time, but it’s something we’ve definitely got.

“It’s definitely been as good as I could have expected it and I don’t have to get on a plane to go home [to Athy]. I can always call home for an evening for dinner if mum’s cooking. It makes it a bit easier.”

Since he made that decision, Carbery is set to lose one of his mentors at Munster in Felix Jones, and he makes no secret of his disappointment.

I did think Saracens probably played their best game of the season. The two teams went out to beat the crap out of each other pretty much

“Felix is a great coach and probably an even better guy as well. I like to sit and chat with him. What I most enjoyed with Felix was in the captain’s run, the kickers would stay out after and he’d stay with us. We’d kick and have little competitions and then we’d get a taxi home and just the chats and stuff. He’s actually a really, really good guy. It’s sad to see him leave. He’ll be sorely missed.”

For the moment, though, it’s unlikely to affect Carbery’s or Munster’s focus, which can only have been sharpened when watching Leinster’s defeat by Saracens last Saturday.

“I thought they [Leinster] were very good. I did think Saracens probably played their best game of the season. The two teams went out to beat the crap out of each other pretty much. A few small things in the game kinda changed it,” he said, highlighting the concession of that Sean Maitland try on half-time.

Knowing the Leinster mentality, Carbery reckons that defeat will heighten their desire for silverware, adding: “It’s going to be crazy. It’ll be pretty intense, I’d say, after the last one anyway.”

Ah yes, the last one, not exactly in the festive spirit last December, won by Munster in Thomond Park and featuring a red and two yellow cards for Leinster. Asked if he was looking forward to coming up against Johnny Sexton again, Carbery laughed, the memories of their own feisty exchanges no doubt springing to mind.