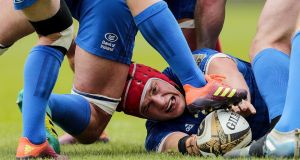 Leinster’s Josh van der Flier in action against Munster in the Pro14 semi-final at the RDS. Photograph: Laszlo Geczo/Inpho

The red scrum cap seemed omnipresent at the RDS, conspicuous even beneath the flailing bodies at the breakdown, accelerating in support of ball carriers and leading Leinster’s defensive efforts as he hunted down red-shirted opponents.

Josh van der Flier’s tackle count, updated to 25 after the match, beggared belief when weighed against the fact that the Pro14 semi-final was his first game back since undergoing groin surgery in February. The initial prognosis was that he wouldn’t play again this season but he never accepted it as a definitive judgment, instead borrowing from the words and mindset of a former Leinster captain, Isa Nacewa.

Looking remarkably fresh given his exploits, van der Flier explained how Nacewa helped to change his attitude to injury primarily but also contained relevant guidelines to being a model professional. “His [Nacewa] attitude towards training, towards everything was always positive.

“It was just his mindset and his mental strength was always absolutely incredible. Everyone still talks about him. ‘What would Isa say? Isa would say this, Isa would say that.’ He has been an incredible influence on the club and still is.

“His mindset around injury definitely inspired me, especially when I hurt my knee [a reference to the ACL tear he suffered against France in 2018]. I had injuries before and kind of just ticked away, get the rehab done and get home, that kind of thing. But his whole mindset, he was big into positivity and the power of being positive about things.

“It helps the healing if you’re positive and not getting down on yourself. He’s a big inspiration that way and then obviously with the injuries it’s helpful to have the likes of Jordi Murphy, I had a good chat with him, Ed Byrne and Tom Daly; those lads who had been through tough injuries and have a really good mindset around rehab.

“I just tried to have a positive attitude and Fearghal Kerin again doing my rehab. He seems to do a good job of getting me back early and then the rest of the medical team, they have to be the best in the world. They’re absolutely brilliant and everything just progressed really well.

“I think I was quite fortunate. I had targets for every day, every session and worked my way quite quickly through it and got back playing. I’m very thankful to the medical team.” Van der Flier also looked at the principles of former players like Kevin McLaughlin and Jamie Heaslip when it came to preparing in the best possible fashion and taking responsibility for everything including when and what to eat.

Leinster head coach Leo Cullen spoke in the build-up to the Munster match about van der Flier’s diligence and how he was an inspiration for the playing group in the way in which the flanker was dedicated to the rehab programme. Cullen described van der Flier’s performance against Munster as “incredible”, a superlative that wasn’t overstating affairs.

The flanker admitted he was nervous coming into the game, the nagging doubts about whether he was ready physically but the work he did in the build-up with Leinster’s breakdown coach Hugh Hogan offered succour. “I was more nervous than I would normally be. That’s having not played in a few weeks. I was worried would I have the fitness to get through. You are always thinking those things.

“We [Hogan] basically did every scenario you can come across in a game really and it all went really well. Then, coming into this, I was nervous. You never know how it’s going to go but I had done everything in the week leading up to it, so I didn’t really have any reason to be nervous.”

He admitted that the week building up to the semi-final was divvied up into a review of the Saracens game but then moving on to preparing for Munster. “Coming in Monday morning, everyone was obviously pretty sore and a bit sorer than normal. Everyone was disappointed and we had a meeting reviewing that.

“Then Leo and Stuart said ‘Right that’s the end of that, move on, we’ll look at Munster now’. We looked at Munster and everyone switched on, preparing for this week then. It’s a tricky thing to do but I thought the lads did brilliantly to turn it around.”

And as for the game itself? “We just managed to convert a bit of pressure, got that 10-point lead and tried to play smart rugby from them on and not give them any penalties. That was the focus. It’s going to be a tough week ahead. Glasgow pretty much playing at home but we’re looking forward to it.”