Israel Folau will not appeal decision to terminate his contract

Rugby Australia has terminated fullback Israel Folau's contract for committing a high level breach of the players' code of conduct by sharing a social media post in which he said hell awaited "drunks, homosexuals, adulterers" and others. 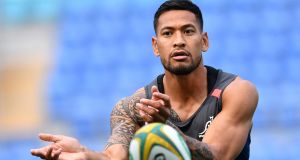 Israel Folau has had his four-year contract with Rugby Australia terminated because of his controversial social media posts about gays and other so-called ‘sinners’ he believes are destined for hell. Photograph: EPA

Israel Folau has decided not to appeal against Rugby Australia’s decision to tear up his four-year, $4m contract for his controversial social media posts, but says he still has a lot of rugby left in him, and a protracted legal battle in the courts remains a possibility.

The former Wallabies star had 72 hours to lodge an appeal after an independent panel last week ruled in favour of RA’s decision to terminate his employment after he posted on social media that hell awaits “drunks, homosexuals, adulterers” and others.

He failed to make contact with RA by Monday afternoon’s deadline, prompting the organisation to confirm the player’s employment had been officially terminated.

“My decision not to commence Rugby Australia’s appeal process is in no way an acceptance of the judicial panel’s findings,” said Folau in a statement. “I simply do not have confidence in Rugby Australia’s ability to treat me fairly or lawfully throughout this process.

“The messages of support from fans, players, former rugby administrators and the public have been humbling. I believe I still have a lot of rugby left in me and the potential impact of Rugby Australia’s decision on my reputation and my career is substantial.”

Folau has not confirmed his next move, but if he does not accept the loss of his lucrative contract, he could now pursue the matter in court, as has been speculated.

“Ultimately, I need to do what is best for my family, my teammates and the fans, so I am considering all potential avenues open to me,” he said.

Last Friday’s decision came after Folau had been warned against making such posts before signing his new contract last year. He had previously posted that hell awaited homosexuals unless they repented.

Rugby Australia chief Raelene Castle said at the time the decision would have ramifications across the sporting world.

“This is a decision that will change the landscape for sport across Australia and perhaps internationally,” she said. “It will be landmark, it will be important, and it is a big decision.

“He is a very important player in our game and he has been for a long period of time and we wanted to make sure we took the time to get it right.”