Leo Cullen: ‘We want to be in finals. We want to win finals’

As Leinster face Glasgow, manager shrugs off criticism of his player selection decisions 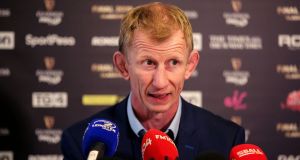 Leinster head coach Leo Cullen: ‘I would say we don’t get all the selections right, but we try to get them right.’ Photograph: James Crombie/Inpho

What constitutes a successful season? A bit like beauty, it’s in the eye of the beholder. Manchester City win the domestic treble, but even then are left looking on enviously at the final of the Cup they most covet.

Leinster have already fallen one short of last season’s double, the highest threshold possible, so would two losing finals be seen, almost ridiculously, as bordering on failure?

Hence, do they need to retain the Guinness Pro14 by beating Glasgow in their own city next Saturday to make it a successful campaign?

“Em, who’s the judge of that?” answered Leo Cullen rhetorically in the aftermath of Leinster’s impressive 24-9 semi-final win over Munster at a packed RDS on Saturday which set up a final between the two Conference winners in Celtic Park.

“So, you guys are the ones who judge. The two competitions that we’re in, ultimately we want to try and win the two. We did that last year. We failed at the final hurdle in one of them [this year], so we don’t want to fail at the final hurdle again.”

Facing Glasgow away is as challenging a final as Leinster could possibly be facing, a point underlined by the Warriors’ 50-20 filleting of Ulster in a less-than-fitting finale for Rory Best and Darren Cave.

“I thought they were very controlled,” said Cullen. “They’ve a lot of attacking threats and so we need to make sure that we’re able to see the pictures of [Adam] Hastings and [Stuart] Hogg, in particular, the two of them and how they work in tandem. Ali Price again sniping around the ruck, you see the damage that those three guys caused Ulster.

“We saw a glimpse of that here a few weeks ago,” Cullen added, in reference to Glasgow’s 39-24 win at the RDS on April 13th. “We’ll have some different personnel to what we had that day. They caused us problems that day when they got inside our 22, very similar to Friday night. They’re very composed and patient. They build pressure and it led to a lot of scores against Ulster.”

The likelihood is that Devin Toner will be ruled out with an injury to his left knee which forced his first-half departure on Saturday, the extent of which will be confirmed on Monday. Although Cullen was typically non-committal on the likely availability of the missing Rob Kearney and Seán O’Brien, the expectation is that Johnny Sexton will be reinstated for the final.

The reaction to the decision to start with Ross Byrne at out-half, as had been the case in last season’s semi-final and following his 11 Pro14 starts there this season compared to Johnny Sexton’s four, while leaving the latter on the bench, was much ado about very little. After all, Man City left Sergio Agüero out of the FA Cup final. Coming at the end of another long, hard season and a week after the bruising final with Saracens, and now with another final next week, it looks like good game management.

Nevertheless, and unusually for him, Cullen took exception to some of the fuss.

“I see some of the headlines about the selections – I think people have a bit of a nasty edge. I don’t know is that the people who write the articles or doing the headlines. We need to freshen up the group. Surely people understand that? Some of the things I see, players being dropped and all this sensationalising some of the selections, I’m not a big fan of. I don’t know who controls that, but it is what it is.”

They just need to be able to understand what their role is for the week, and that we’re all in this together

No less than for Pep Guardiola, managing such a big squad is not an easy task, and when asked if the players are always understanding of their selections, Cullen cheerfully admitted: “Probably not. I try to explain it to them so sometimes when they’re listening to me it’s in one ear and out the other, but that’s just the way it is.

“We have lots of different conversations with the guys over the course of the season. The main thing is they just need to be able to understand what their role is for the week, and that we’re all in this together. I would say we don’t get all the selections right, but we try to get them right. We do them for all the reasons. So you try to gauge the chemistry of the group and what we need, but other people might go about doing some things differently. So it is what it is.”

1 GAA players spend just 2.5 seconds within 2m of each other during play
2 How a GAA club sprang up in east Belfast over Sunday breakfast
3 The Irish Times shutdown sports quiz: Part one
4 Premier League to allow five substitutions per team when games resume
5 ‘Why do you need the money now?’: Schalke apologise for ticket refund questions
Real news has value SUBSCRIBE

The Irish Times shutdown sports quiz: Part one 16:15
Rafa Nadal says he would not travel to US Open in present circumstances 15:09
Premier League to allow five substitutions per team when games resume 14:34
‘Why do you need the money now?’: Schalke apologise for ticket refund questions 13:50
Shane Long signs new two-year deal with Southampton 12:46
Here is your handy guide to sport on television this week