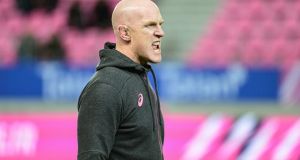 Can Paul O’Connell be the answer for Munster? Photograph: Dave Winter/Icon Sport via Getty Images

Munster will come back stronger says Johann van Graan. Irish rugby needs this to be true.

Leinster playing at about 65 per cent – having benched their best player and replaced three decorated veterans – should never be winning this fixture with 15 points to spare.

“We’re only getting Nick [McCarthy, the third choice Leinster scrumhalf] in for next season and that’s where we currently stand,” van Graan conceded.

With Joey Carbery, Tadhg Beirne, Peter O’Mahony, Conor Murray, CJ Stander, Keith Earls, Chris Farrell/Andrew Conway and their entire frontrow disappearing until November, “there might be some short-term opportunities” to bring in more non-Springbok standard South Africans, but even that remains “a constant process between the IRFU and Munster”.

Maybe Peter O’Mahony’s words will resonate: “There’s some parts of our physical game that we need to improve, certainly.”

Rassie Erasmus cleverly extracted foreign player concessions from Lansdowne road in 2017 but, partly due to the Thomond Park debt, van Graan must make do with Arno Botha and Chris Cloete.

Fact: Munster are without a homemade coach or, crucially, an operations manager like Guy Easterby in Leinster and Bryn Cunningham in Ulster to shoulder the load.

“We will get the right person and if we need to wait a number of weeks or months we will do that,” van Graan said of the new attack coach.

“The positive is we got continuity in our players.”

The players who, since Paul O’Connell retired in 2015, have lost five semi-finals and a final. Wait, don’t Munster also need a forwards coach? Isn’t O’Connell available? If ever dot A needs joining with dot B.

By the numbers: 2 - Key men, Scott Penny and Harry Byrne, ruled out of Ireland’s under-20s World Cup squad for Argentina in June. Like Paddy Jackson being held back in 2012, Leinster would be forgiven for mending Penny’s shoulder in time for next season, when he will be the province’s primary openside during the World Cup.

Josh van der Flier. Groin surgery in March, man of the match in May. The RDS was billed as a battle of the backrow and Leinster prevailed. With Ireland slots on offer, Phoenix from the Flames proved himself the premier openside on this little island. Likewise, Jack Conan at number eight.

Still, Peter O’Mahony and CJ Stander remain on course for the World Cup opener against Scotland. Stander wore number seven but blindside or impact are his likely roles in Japan.

The Ryan era has long since begun.

Quote of the week: “Hopefully we’ll have a good crowd of Leinster supporters over there. Glasgow rugby players all support Rangers I’ve been told, so the Celtic fans in Glasgow should be supporting us.” Leinster coach Leo Cullen on next weekend’s final with Glasgow Warriors at Celtic Park

Things come to a head for Leo

Long old season. Leo Cullen was unhappy in victory with certain headline writers for stating Johnny Sexton, Seán O’Brien, Rob Kearney or all three were dropped when merely excluded from the Leinster team. (We safely presume Jack McGrath was dropped).

“I don’t like the way...” Cullen began, “I see some of the headlines about the selections, I think people have a bit of a nasty edge. I don’t know is that the people who write the articles or doing the headlines. You know, we need to freshen up the group, surely people understand that. Some of the things I see, players being dropped and all this sensationalising some of the selections, I’m not a big fan of. I don’t know who controls that.”

Message received, sort of. George Kruis hurt Sexton near the end of the Champions Cup final but Josh van der Flier and Jordan Larmour replacing O’Brien and Kearney for what could have been the pair’s last game at the RDS leads to unavoidable assumptions.

Cullen was duly asked about O’Brien and Kearney returning for next week’s final. “We’ll see.” Such an answer is how “nasty” headlines can grow. Now, Cullen can’t be revealing key decisions either. Long old season. One more week.