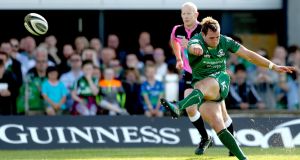 Agonisingly close, but for a third successive season, Connacht succumbed to Glasgow Warriors on opening day of the Guinness Pro14 Championship.

A missed last-gasp penalty denied Connacht a key early-season win under new coach Andy Friend, with the Scots lucky to escape a sunny Sportsground with a bonus point win.

It was a case of little moments and opportunities, said Friend. “We were not good enough to finish it off. Our attack shape gives us great opportunity and momentum going forward, but we have to be better in converting it into points.

“I thought we probably needed to back ourselves. My key takeaway is that we are definitely in the hunt. We just have to get better at some of the small things, and make it difficult for teams we meet,” he said.

Connacht, having led at 23-17 at half time, looked on target to redress the previous two losses to the Warriors.

But despite controlling possession for long periods of the second half, they failed to build on a 41st-minute Jack Carty penalty – the last of his 16 point tally. The Scots, with numerous international leaders, none more so than fullback Stuart Hogg, eked out a victory.

Hogg’s superb touchline kick set up a Johnny Gray-led maul in the 64th minute, and his drop goal in the 73rd minute sealed the deal.

“Glasgow are a good side and that’s what good sides do,” said Friend. “They manage to win the tight ones. There was a lot of good things from our team, but we need to be better.

“We have to look at the areas we did well in and make sure we cement that in our game, and then there are simple areas we can fix. They are easy ones to fix.”

With Michael Bradley’s Zebre returning to the Sportsground after bagging a bonus point 32-16 win against the Southern Kings, Friend knows Connacht will “need to do it quickly.”

The home side recovered from a poor start after Glasgow’s influential No 8 Ryan Wilson broke out of defence, and Hogg provided the chip ahead for Tommy Seymour to touch down.

Connacht did not help themselves with some poor restarts, but they took advantage of an 11th-minute penalty to open their tally through Jack Carty, and three minutes later, the outhalf’s superb crossfield kick provided an in-form Cian Kelleher with the opportunity to bag his side’s opening try after some patient attacking play.

Carty, who missed only one kick all day, added the conversion for a 10-5 lead, but Glasgow hooker George Turner capitalised on some poor fringe defending to charge through from 10 metres, and Peter Horne added the extras.

There was much to admire in Connacht’s attacking play. Jarrad Butler played a captain’s role, leading his pack into contact, Tom Farrell and Tiernan O’Halloran were influential in the build-up to try No 2, and Blade’s pass found a willing Finlay Bealham, who sidestepped the defence to touch down. But once again Glasgow regained the initiative before Wilson bagged the second try, a second through direct play.

Three successive Carty penalties had Connacht on the front foot for much of the second half, but despite a solid line-out and the ability to carve out numerous attacking platforms, it was concerning they failed to score after the 41st minute. A last-minute penalty attempt from replacement Craig Ronaldson, however close, was always a long shot.