Shaky start for Ulster as they strike lucky against Scarlets 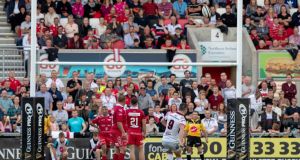 Not the worst start in the new job, but Dan McFarland has been around long enough to know that Ulster, for all their work ethic, struck it pretty lucky to take the spoils from this one.

After all, the new Ulster head coach’s charges ended up playing the last 12 minutes against 14 men and only bagged the winning score right at the death – John Cooney’s fifth penalty on an evening when he supplied all Ulster’s points – after David Bulbring was spotted preventing Cooney from latching on to Ross Kane’s pass and the Scarlets’ lock made his way to the bin just as his team-mate Ed Kennedy was preparing to leave it.

While Wayne Pivac could only bemoan his injury-hit side’s panicky inability to control the ball and close out this opening Pro14 game, he knew a losing bonus point was coming as Cooney’s 79th-minute kick was straight on to the posts – unlike his tricky effort three minutes earlier which had gone wide – with the Ulster scrum-half making no mistake.

So, Ulster had the four points from a typically early season clash punctuated with much endeavour but frequent inaccuracy from both sides.

And while there was plenty to admire from Ulster’s ambition and determination with and without the ball, they were certainly guilty of costly-looking errors – new signing Billy Burns missing touch after Kennedy’s sin-binning was a rare but significant blot on his largely impressive debut – as well as some inaccurate breakdown and scrummaging work.

Having said that, Iain Henderson’s return to action saw the Ireland front-liner disrupt some key lineouts against last season’s Pro14 losing finalists, and he put in just over an hour’s work in front of the watching Joe Schmidt.

Will Addison and short-term signing Henry Speight’s competitive debuts were also noticeably promising, as was the sight of Marcell Coetzee getting through some work.

“I wanted a competitive edge, that’s what I wanted to see, and I think I got that for a lot of the game,” said McFarland.

“Some really showed that fight-for-every-inch mentality,” he added, echoing an already-familiar mantra since his arrival.

We want to play a game where we exploit the talents we have, so the breakdown has to be a lot better

“And no more so than by the fact we had to squeeze it over in the last few minutes.

“We looked really good when we kept the ball off the floor,” said McFarland, who noted sub-Academy player Angus Kernohan’s eye-catching cameo off the bench.

“I didn’t think we looked so good when it got to the breakdown. We want to play a game where we exploit the talents we have, so the breakdown has to be a lot better.”

Much to be done then before Edinburgh – who lost narrowly at the Ospreys – come to the Kingspan on Friday night.

“I know Edinburgh well, obviously, they are extremely organised and their defence is one of the best in the league. People may not talk about it, but I know it is,” McFarland maintained.

Last Saturday’s result also brought the northern province a six-game unbeaten run in competitive games since the back-end of last season, as well as giving them first blood in what will be four encounters with the Scarlets in this campaign as they are both in the same European pool.

Scarlets – without Jonathan Davies, who was a late withdrawal due to a hamstring issue – were 7-0 up after the same number of minutes after Rhys Patchell had burst through Cooney to dot down and convert.

Two Cooney penalties, in the 12th and 16th minutes, tucked Ulster in behind and they took the lead with his third strike four minutes before the half-hour.

However, Cooney was short from further out and the home side were unable to improve on their 9-7 interval lead.

The new half opened with Nick Timoney getting underneath Ken Owens and helping prevent what looked a certain score at the posts, though the Scarlets did take the lead again on 53 minutes via replacement Dan Jones’s first penalty.

Five minutes later Cooney nudged Ulster back in front after being illegally cleared out by Jones, though the latter put his side 13-12 up with a penalty on the hour.

With Kennedy binned for leading with the shoulder on Speight, Ulster had the numerical advantage – and kept it with Bulbring’s yellow – but only made it count with a minute remaining and Cooney’s cool shot at goal.