Scarlets will pose a major test for depleted Munster 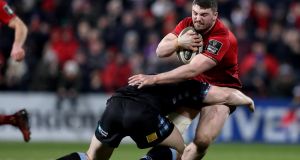 Ordinarily a game against the Guinness Pro14 champions would appeal to Munster on a number of levels, providing them with a rigorous workout seven days prior to a Champions Cup quarter-final against Toulon.

Unfortunately they must embrace the opportunity in the shadow of injury and the non-availability of their international contingent, Conor Murray, Peter O’Mahony and CJ Stander, some of whom have taken to their travels and headed to more exotic and warmer climes for well-earned rest and recuperation following their Grand Slam exploits with Ireland.

Unfortunately Keith Earls, who is enjoying a brilliant season in red and green jerseys, sustained knee ligament damage and the suggestion from Munster coach Johann van Graan is that it is likely to be potentially season ending. The backline resources were in a parlous enough state prior to that latest bit of misfortune.

Short-term anxiety surrounds injuries to Andrew Conway (knee) and Simon Zebo (hamstring) not to mention the lengthier playing absences of Chris Farrell, Jaco Taute and Chris Cloete. It was then confirmed that scrumhalf Duncan Williams, who suffered a fractured eye socket and cheekbone in training would miss the rest of the season, so too outhalf Tyler Bleyendaal, who requires further neck surgery.

It’s just as well that Alex Wootton has recovered from a hip problem that saw him depart early in the Edinburgh match while centre Rory Scannell has shrugged off a shoulder knock. Van Graan will be keeping everything crossed that nothing further untoward happens during the Scarlets match.

JJ Hanrahan shifts to fullback with former Ireland Under-20 international Calvin Nash given an opportunity on the right wing. Sam Arnold is an excellent young prospect, reflected in time spent in Ireland camp, and his midfield partnership with Rory Scannell will be crucial; this week and next. James Hart partners Ian Keatley at halfback.

The pack is in ruder health both in terms of the starting eight and also the quality of replacements on the bench. There’s plenty of athleticism in the back row while prop Dave Kilcoyne returns to supplement the ball-carrying ballast.

Scarlets coach, Wayne Pivac welcomes back some of his Welsh international contingent, including free scoring wing, Steff Evans, outhalf Rhys Patchell and his halfback partner, Aled Davies. Former Leicester Tigers and England wing, the speedster Tom Varndell, who signed for the west Wales club on a short-term contract, continues in the team.

Up front, hooker Ryan Elias, prop Samson Lee, flanker Aaron Shingler, who made the shortlist for the Six Nations Championship player of the tournament and openside James Davies beef up the pack. Tadhg Beirne, who joins Munster in the summer, will make his 50th appearance for the Scarlets this evening.

A key for Munster will be to try and stifle their visitors’ access to possession and that means hanging onto the ball, kicking judiciously and with an organised kick chase.

Another key component for the home side will be to protect their possession at the breakdown. Beirne leads the league in pilfering turnovers and James Davies isn’t too far behind in that respect.

There is no doubt that the Welsh side will put width on the ball, that they’ll offload, and look to use that pace on the wings. From a defensive perspective they will be aware that the limited amount of training time available to what is essentially a rejigged Munster backline is bound to have some cohesion issues. As a sidebar how Arnold fares against Scott Williams will be worth watching.

If the home side are to win then the Munster pack will need to be dominant in most facets of the game and therein lies the challenge.

1 Gerry Thornley: After 32 weeks the Six Nations is back up for grabs
2 Extremes of sweet and sour for Solskjaer as Man United show signs of revival
3 Arsène Wenger: Arsenal was a matter of life and death to me
4 Stockdale and Ringrose on board with expansive Irish game plan
5 Johnny Sexton aware of how Ireland can offer fans an escape
Real news has value SUBSCRIBE