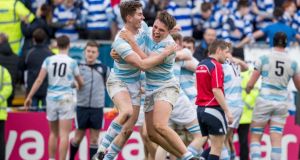 Blackrock College’s 69th Leinster Schools Senior Cup title was achieved in an impressive and emphatic manner against the two-time and defending champions, a game that was effectively decided in the opening 35 minutes.

Belvedere were rocked to their core as Blackrock produced passages of scintillating rugby, incorporating backs and forwards, subtle changes of emphasis and sheer bullocking power with which their opponents simply could not cope.

There was so much to admire in the collective patterns, embellished by individual contributions from Liam McMahon, Seán O’Brien, Michael McGagh and Josh Dixon to single out four; albeit that seems a little invidious given how well the team played.

Belvedere will rue their first-half performance, an aberration, when weighed against the second 35 minutes and in players like the outstanding David Hawkshaw, David Lacey, Alistair Loughrey, Gerard Hill, Aaron Coleman, Ted Walsh, Luke Harmon and Ruadhan Byron were belatedly able to properly represent the ability in the team.

Blackrock were methodical and unflustered as they patiently pummelled Belvedere on the fringes, where tight pods, with props Donnacha Mescal and Thomas Clarkson generally in the van, surged over the gainline, providing their team with picture perfect, front-foot ball that allowed quicksilver scrumhalf Louis O’Reilly to choose the next pressure point.

The winners rolled over their opponents, waves of blue and white that poured through every crack and crevice in the Belvedere defence. The latter didn’t help themselves at times, too often going high in the tackle, slow to realign and looking leg weary from early on in the game. Belvedere’s defence was in marked contrast to the energy and vision that was a hallmark of some of their attacking patterns.

There was much to admire in the way that Blackrock ripped Belvedere asunder, an amalgam of power and pace, creating space and then exploiting with clever variations to race into a 21-0 lead with tries from McGagh, McMahon and James Tarrant, with the latter adding two conversions while fullback Stephen Madigan landed one.

Belvedere’s loosehead prop James Gleeson barged over for a try after secondrow James Murphy snaffled a Blackrock throw at a lineout close to the winner’s line, batting the ball towards Gleeson. David Lacey kicked the conversion but McMahon’s second try four minutes before the interval, a beautifully worked move that involved Dixon, was brilliantly finished under the posts by the Blackrock right wing.

Tarrant’s conversion made it 28-7 and not even the most ardent Belvedere supporter would have relished another 35 minutes, if it was to be framed in a similar fashion to the first half.

Belvedere came out repackaged as the defending champions after the interval and brought that quality to their patterns, taking the contest to Blackrock with a greater dynamism and persistence that could have yielded a couple of tries in the first eight minutes of the second half; that they didn’t was down to spirited Blackrock defence and maybe taking a different option here and there.

It’s a minor cavil because the game had become a contest. A problem for Belvedere given the scoreboard pressure was that they needed to score quickly to try and make inroads into the deficit but it wasn’t until the 51st minute that they managed to begin that journey with a try from replacement Cian Scott.

He was the beneficiary of a tightly constructed lineout maul that eventually battered a way to, and then over, the Blackrock line. Lacey saw his conversion come back off a post. Belvedere had dominated possession and territory and continued to do so before succumbing to the classic sucker punch.

Belvedere had sufficient numbers when Blackrock number eight Ed Brennan received possession just inside his own half but he bounced a tackler, ran 30 metres before linking with Tom Maher and after pounding away through several phases on the Belvedere line, replacement scrumhalf Ross Barron scampered over unopposed under the posts.

Tarrant’s conversion made it 35-12, and while the nature of the try must have been hugely deflating, Belvedere finished the match like champions. They continued to press, kept playing and might have pinched one more score but ’Rock were unyielding, epitomised by captain Liam Turner’s late touchline tackle that prevented a likely score.

It was difficult to reconcile Belvedere’s performance in the opening 35 minutes with the quality of their post-interval resurrection; it will be a small regret.

Blackrock though were worthy winners, playing a superb brand of rugby, bright, accurate, well-drilled with some outstanding individual contributions in what was an excellent collective effort, saving their best performance of the competition for the final, a fitting epitaph to their efforts.