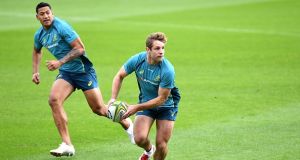 Connacht has announced the signing of centre Kyle Godwin from Super Rugby side the Brumbies. He will join his new team mates at the Sportsground ahead of the 2018/19 season.

The Zimbabwean born 25 year-old joined the Brumbies in 2016 having previously played for Western Force. In 2014 Godwin was recognised as the Western Force’s most outstanding player with the inaugural Nathan Sharpe Medal, Members’ Most Valuable Player Award and Rising Star Award. Since earning his first cap for Western Force at the age of 19 he has since gone on to make 66 Super Rugby appearances.

Godwin’s impressive performances also resulted in him achieving senior international recognition with Australia, when he was capped against France in November 2016. Prior to that Godwin had also represented Australia at Under-20 level in 2012 at the IRB Junior World Championship in South Africa and the Australian schoolboys in 2009.

Commenting on their new signing, CEO of Connacht Willie Ruane said: “Kyle is a highly rated player with significant Super Rugby experience and we are excited by what he will bring to our midfield as we target further success in the seasons ahead.”

While Godwin himself added: “I am really pleased to be joining Connacht and I’m looking forward to getting there and meeting my new team mates. I have had a fantastic few seasons with the Brumbies and am really grateful to everyone at the club for my time there. It will be a new challenge playing in the Pro14 but I know Connacht are really ambitious about their plans for the future and I hope to play a significant part in that over the next few seasons.”