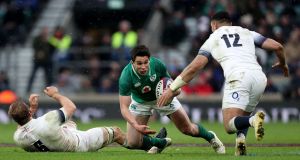 Joey Carbery in action againt England at Twickenham. The outhalf will line out for Leinster at Liberty Stadium on Saturday. Photograph: Billy Stckland/Inpho

Jordan Lamour’s leg injury aside, Leinster coach Leo Cullen has been able to call upon, a sizeable contingent of players from the Ireland squad that claimed a Grand Slam victory against England at Twickenham last Saturday.

Jack McGrath, Seán Cronin, Andrew Porter, Jordi Murphy and Joey Carbery are included in the starting line-up for the trip to the Ospreys, while scrumhalf Luke McGrath has recovered from injury to lead the team. Jack Conan and Fergus McFadden who also travelled to London last weekend as additional players are also in the Leinster team.

While the focus is firmly on the Ospreys match, Sunday week’s Champions Cup quarter-final against Saracens at the Aviva stadium means there has been something of a twin track approach for the Leinster players and management this week.

Cullen explained: “Yeah exactly, we’ve a Saturday night game (Ospreys) which means we get back late so it is tricky balancing it. The group will obviously manage the guys who’ve played throughout the week depending on how they’ve come through the game and some guys will be coming in fresh which is good as well because it allows you to go harder.

“A lot of guys wouldn’t have played for Leinster since Montpellier, even Glasgow prior to that so it’s early January (since the last time there were involved). But they’ve been around, they come in on some of their time off from (Ireland) camp and they’re not million miles away.

“If you lose some of these big games then your season could unravel very, very quickly. It’s just trying to get the balance right for the game this week and the game next week and then we can see how we manage the two weeks after that depending on what’s ahead.

“So it’s more making sure that we’re clear on what our plan is for these next two weeks in terms of integrating guys because what’s on later in the season is a little bit different. For us it’s just trying to balance, making sure we have guys fully motivated to deliver on the day, to deliver positive performances that will deliver positive results.

“I think the two teams we’re playing against, we’re playing Ospreys away; it’s a tough challenge. A lot of guys will be scrapping to put in a performance to try and get in the team for the following week. They know what’s at stake, I think, well they should know at this stage.”

It’s a powerful incentive for individuals to produce a performance that makes it difficult for Cullen to omit them when Saracens come to Dublin the following week. Rob Kearney, Garry Ringrose, Jonathan Sexton, Cian Healy, Tadgh Furlong, James Ryan, Devin Toner and Dan Leavy will all be back and available, James Lowe too, while Seán O’Brien and at a pinch Rhys Ruddock could also be in the mix.

Despite an extensive injury list the Ospreys are able call upon a number of Welsh internationals, led by captain, Alun Wyn Jones, Justin Tipuric and Dan Biggar. Interim coach Allen Clarke explained: “Interim Head Coach, Allen Clarke, enthused: “We’ve been able to welcome back quality and experience into the group this week and we’re in a good place as far as preparation is concerned.

“It says a lot about our environment that players are making themselves available straight off the back of a busy Six Nations campaign, key individuals want to pull on the shirt for these big games.”

Leinster should have won their last two matches on the road but ended up have their pockets picked late on in the defeat to Edinburgh and the 10-10 draw against the Scarlets. Given the quality of their pack Leinster should be able to provide a decent enough platform to stockpile the points and a victory.