Sexton misses out against Munster with calf strain 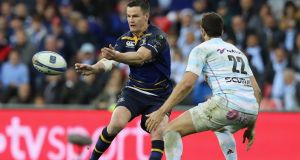 “He (Sexton) went to run yesterday and thought it wasn’t 100 per cent and we made the call.”

Leo Cullen confirmed that Johnny Sexton has been ruled out of tomorrow’s Guinness Pro14 semi-final against Munster (kick-off 3.15pm) due to a calf strain he sustained in last Saturday’s European Champions Cup final. Sexton had been pencilled in for a role on the bench, but Cullen said his outhalf should be fit for a possible final at the Aviva Stadium should Leinster prevail against Munster.

Describing Sexton’s injury as “just a bit of tightness in his calf”, Cullen said: “We actually named him on the bench at the start of the week and thought he would be okay. He went to run yesterday and thought it wasn’t 100 per cent and we made the call. We’d named Ross (Byrne) at the start of the week, there wasn’t a huge amount of disruption from our part. Guys have trained well this week, it’s been a tight turnaround after last week.”

As to the chances of Sexton being for a putative final, Cullen said: “Yeah, I would expect that. You’re never 100 per cent sure, but all the signs are that he should be okay next week, if there is a next week.”

If Sexton’s unavailability is not that surprising, nor is Isa Nacewa’s presence even though he was still limping heavily with the calf strain he picked up in the final. In the absence of Robbie Henshaw, he reverts to inside centre and will captain the side again for what will be his RDS farewell.

“I’ve never come across anyone like him,” admitted Cullen. “He’s an amazing individual and an amazing role-model for the club. I wouldn’t even say just for the players, for anyone that’s come across him. Hopefully the boys put in a good performance for him tomorrow.”

As for Henshaw, it seems unlikely he would be fit for any possible final, although he should be fine for the impending three-test tour to Australia, according to Cullen.

“He’s done a little bit of damage to his knee. It’s nothing too major, a few weeks, I talked to him in the gym today and he’s making quick progress. He’s nearly happy to go again but it’s too soon for him this week. A couple of weeks.”

Having used 55 players this season, Cullen revealed this had been a particularly difficult selection, with six changes in personnel and two positional. In addition Ross Byrne replacing Sexton and Nacewa switching to inside centre, Joey Carbery comes in at fullback for Rob Kearney, James Lowe is back at left wing, Jack McGrath rotates with Cian Healy, while Rhys Ruddock and Jack Conan come into the backrow, with Jordi Murphy moving to openside in what will also be his RDS farewell game as Dan Leavy is given a well-deserved rest.

“We picked up a couple of bangs as well,” said Cullen. “We’re judging all the time what guys are doing and what sort of form they are in. You look at the opposition you’re coming up against as well, so what guys have done over the course of the campaign.

“A guy like Ross, we picked him at the start of the week because he’s played the majority of our games at number ‘10’ this year. We want to reward guys who have actually gotten us to this position. Ross, even in Europe, played in the six pool games. He started the Montpellier game here, the Montpellier game away. He came on in the first two minutes of the game against Exeter at the Aviva. He came on in the other three games as well, he played a huge part. He had to deal with the disappointment of not being involved in the quarter, semi and final of Europe even though he’d been involved in all six pool games.

“That’s been a bit of the story over the course of the season with a lot of players that have got the team into position, they’ve done the bulk of the work and then sometimes don’t get to play in the big games. And this is another big game for us, a huge game.

“The work that goes into getting us to this point, we use a lot of players. It’s been well documented and talked about when guys are away playing with Ireland etc, etc. It’s trying to reward players for the right reasons and show that level of loyalty to them because they’ve put in a huge amount of work to get us to this point, so it’s not a straightforward selection for us, this one, not straightforward at all.

“What jumps off the page for someone on any given week, they might have certain thoughts in their head, but we’ve tried to way up a number of factors because this is a very, very complicated selection.”

This will be Munster’s first visit to the RDS since Leinster beat them at the same stage of this competition by 16-6 eight seasons ago.

“There is always something extra special for us, even playing Munster here in the RDS - it’s 2010 since that took place,” said Cullen. “I was actually injured for that game, I went for shoulder surgery the week before, but they’re huge games.

“It means a huge amount, there’s a tour coming up to Australia and everyone is going to be pushing for selection for that - the ones that are qualified at least. They’re special games to be part of.

“I was talking to Scott Fardy out on the pitch, this is why he wanted to come to the club to play in games like this. He’d seen Leinster v Munster games in the past, they’re talked about around the world. Two great sets of supporters and generally there’s players that are fully committed into the game and I’m sure tomorrow will be no different.”

Cullen also spoke of the need to replace their Bath-bound backs’ coach Girvan Dempsey. “Girv and I go back a hell of a long time,” said Cullen of someone he has worked with in Leinster for over 20 years. “Girv’s role in terms of what he delivers in backs and attack - a lot of our starter plays Girv takes on board the majority of that. All the start players we use, the way we defend off set-piece, etc., as well, a huge amount of the back three, counter-attacking, kicking and skills. Emmet Farrell obviously helps out in that regard, but Girv’s role is huge so we definitely need to fill that.”

Ryan happy to get back to leading by example when Sexton returns 15:54
Mayo’s James Horan criticises ‘outrageous’ 26-player match day limit 13:52
Dundalk’s Jordan Flores on the shortlist for Fifa Puskas award 10:35
Can Solskjaer’s Man United find their groove when it matters? 09:28
Andy Murray says ATP needs a domestic abuse policy 08:40
Here is your handy guide to sport on television this week