Peter O’Mahony defends Munster decision to go to the corner 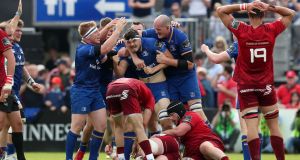 Leinster’s Max Deegan and team-mates celebrate winning a penalty in the final moments of the Guinness Pro 14 semi-final against Munster at the RDS. Photograph: Billy Stickland/Inpho

So long Simon Zebo, and Gerbrandt Grobler. Leinster denied the outdoing Munster pair a romantic farewell against Scarlets in next weekend’s Pro 14 final as a season doused in individual anguish and borderline trauma concludes in Dublin.

Two seminal moments directed victory Leinster’s way. Jean Kleyn’s sin-binning and, late on, the penalty against Munster when they were pounding the tryline.

“I’ll go have a look at it,” said coach Johann van Graan, “There was emotion, it was a big call in the game, scrum five yards away, obviously in a semi-final a yellow card is costly.”

Then, as Leinster visibly tired, Berry suffered the ire of Conor Murray when penalising Munster inches from the line despite Jordan Larmour appearing to be offside.

“I ended up in that ruck so I didn’t see what happened behind me,” said Munster captain Peter O’Mahony. “He said something about someone using their foot in the ruck. We put Jordan under pressure and counter rucked, I thought we stayed on our feet and did well but obviously someone didn’t.”

The sweltering conditions exacted an enormous toll on both sets of players but the European champions mustered the energy levels, seven days after scaling the Bilbao summit, to deny their sloppy rivals from snatching victory late on.

Munster problems are clear for all to see. JJ Hanrahan was given the 10 jersey after Ian Keatley’s difficulties against Racing 92 in the Champions Cup semi-final. But the Kerry outhalf failed to take his chance. He missed a straightforward penalty and could not return for the second half after being hurt when cleared from a ruck on 31 minutes.

Keatley arrived to make minimal impact, as Murray continued to direct the Munster attack, but the Dublin-born pivot did land a touchline conversion of Grobler’s try which reduced arrears to 16-15 with 90 seconds remaining.

There were other huge moments. On 68 minutes the Munster leadership, interestingly, opted for touch rather than three points when trailing 13-8.

“It’s easy to say in hindsight but there are decisions to be made out there,” said O’Mahony. “You know what I mean? That’s my call. I’ve got to make those calls.”

What was the captain’s thought process? “I felt like we had a lot of momentum. We were winning a lot of collisions. We were going well up the field. That’s the way I felt it was going.

“If we had gone and scored it would have been a momentum changer but we were inaccurate at the lineout and that put us on the back foot and we conceded a turnover penalty for holding on.”

A chop tackle by man of the match James Lowe – fantastic in the air and he ran over Zebo for Jack Conan’s try – allowed James Tracy steal valuable possession.

Grobler, consistently overlooked for selection in the starting XV since a previous suspension for steroids was revived by the media questioning the IRFU’s “zero tolerance” policy towards doping, used his muscle for the late try but it was Max Deegan’s turnover after Dave Kilcoyne’s carry in injury time that proved the last heroic act of this game.

The impact of Scott Fardy also proved important while the ability of James Ryan to keep going for 80 minutes beggars belief – the 21 year old phenom was excellent once again with a turnover tackle on Kleyn and running over Billy Holland among his star turns.

Nacewa would not have been selected if this wasn’t possibly his last ever game of rugby.

“Isa was struggling during the week so to get through 40 minutes I thought was a real testament to him,” said Cullen. “He’s been amazing but led the team well through the week despite being compromised physically. We had a fair idea he wouldn’t make it past half-time. We made the call during the week but Isa is at a different level to anyone I have ever come across before.”

Cullen refused to rule him out of the final.

“We’ll see how he comes through the next few days.”

Jordi Murphy was outstanding, yet again, while Luke McGrath’s controlled kicking appears to signal his arrival as Conor Murray’s primary understudy for Ireland.

The wonder now is whether Leinster can rediscover the standards that saw them destroy Scarlets in the Champions Cup semi-final.

“I think so. We definitely have a better chance leading into the final than this week. This was a really tough challenge. I can’t say enough about the character of the guys.”

So, Munster disappear from view with Van Graan charged with improving a squad that replaces Zebo with Mike Haley and Grobler with Tadhg Beirne.