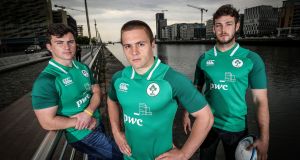 Diarmuid Barron, Caelan Doris and Matthew Agnew at the announcement of the squad for the U-20 World Cup in France at Spencer Dock in Dublin yesterday. Inpho: Dan Sheridan/Inpho

A new captain, five uncapped players, a coaching team trimmed by one and injuries to a couple of key players represent an overview of the challenges facing Ireland head coach Noel McNamara ahead of the U-20 Rugby World Championship.

Ireland’s campaign begins with a match against the tournament hosts, France, in Perpignan on Wednesday week.

Ireland will also play South Africa and Georgia in their pool matches and then a further two games based on results that will rank the team from first through to 12th.

McNamara confirmed that defence coach Tom Tierney wouldn’t be travelling to the tournament.

“The coaching group is now Ambrose [Conboy], Paul [O’Connell] and myself; Tom [Tierney] isn’t involved for the Junior World Cup. ”

Caelan Doris, who missed the U-20 Six Nations Championship with a badly torn hamstring, takes over the captaincy from Tommy O’Brien.

The 20-year-old Ballina native was a standout performer last season at this age-grade. He recently made both his Leinster debut, a 19-minute cameo off the bench in a Pro14 game against Connacht at the Sportsground, and was one of four players whose contracts were upgraded from academy to senior.

The Ireland coach will be hoping that the young man who wore the number eight jersey and produced a series of brilliant displays in the recent Six Nations, Jack O’Sullivan, recovers from an injury he picked up while playing with UCC. He is named in the 28-man squad but will have to prove his fitness.

Angus Curtis (concussion), another outstanding performer in the tournament, misses out as do hookers Ronan Kelleher and Eoghan Clarke, openside flanker Sean Masterson and wing Peter Sullivan but their misfortune means that Dan Hurley, Tom Roche, a brother of Ireland Sevens player, Mark, Peter Sylvester, Joe Byrne and Dan Sheehan are in line for Ireland debuts.

McNamara has opted for a 16/12 split in the squad and so versatility was a cherished attribute.

He explained: “Dan Hurley is a guy who would have played Irish Schools with me a couple of years ago. He was top try scorer in the Under-18 festival with five in three games. He is someone who has a physical presence, who has played AIL with Young Munster, and is a guy we are very happy to have.

“Tom Roche has had a great year for Lansdowne in the 20s. He played 12; he’s got a bit of versatility. He is a guy who will add a physical edge to us in the backline. Peter Sylvester is a good playmaker and brings other people into the game. I think he just adds another dimension. Obviously we are facing three teams that are very forward orientated. It just meant that players that were versatile like Tom Roche and Peter Sylvester were very beneficial to us.

“In the forwards Dan Sheehan is a guy who comes in off the back again of a good year at U-20 level and AIL playing with Trinity,” he added while also singling out the power of former Blackrock schoolboy Joe Byrne in the tight.

Ireland beat Scotland and a Munster team in recent weeks, faced Japan at Merrion Road on Monday afternoon and will do so again on Tuesday in a three x 20-minutes training matches before departing for France at the weekend. The Irish matches will be shown live on Eir Sport.

*Denotes uncapped at this level