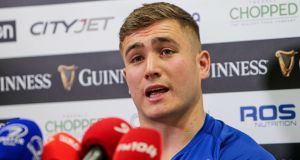 Jordan Larmour: “If you told me that at the beginning of the season I wouldn’t have believed you.” Photograph: Gary Carr/Inpho

This is roughly how it went. Jordan Larmour bent over his notebook and began to write. It was before the start of the new season and he was goal-setting, drawing a picture of the arc of his career as he would see it over the 10 months of the 2018 campaign.

He began to scribble down the marks that he hoped to hit, the shape of the landscape, the games he wanted to play, the Leinster teams he hoped to make, the steps forward he planned to take along and up the professional ladder.

“I’d written down on my notebook to start in the B&I [British and Irish Cup],” says Larmour. “And get a few Pro 14 games under my belt.”

Slam dunk. He has learned to shoot a little higher now. The truth is nobody saw it coming, least of all the 20-year-old, who jotted it down less than 12 months ago and now has more than a career’s worth of silverware in his pocket with the promise of more.

An unforeseen Grand Slam was followed by an unforeseen European Champions Cup medal and, with the Pro14 final on Saturday, Larmour, now eyes wide open, is poised to encrust his notepad with the only remaining jewel of 2018.

The Ireland tour to Australia and three Test matches, injury aside, also seems a certainty.

Most careers are not like that of Larmour because talent is rarely enough. Hard work, timing, position vacancy, injuries, coaches preference, willingness to take each step all gang up to regularly haul players back to earth.

Leinster, Ireland and Lion, Luke Fitzgerald had a similar comet tail trailing from his school exit into the Leinster team. But few players can manage the different gear changes without the occasional slip.

“I thought it would be a lot different,” he says. “But it’s just like another rugby team. It’s a group of lads, everyone playing the game. Everyone just loving playing it as well. The competition for places is so high in here. If you have a bad training session it hangs over you.”

Larmour’s last match for his club side St Mary’s College was years ago alongside Irish U- 20 captain and number eight, Caelan Doris, against Clontarf.

He’s unsure of his last British and Irish Cup appointment but thinks it was against Cardiff in Donnybrook. Such details now slip by.

“Me and Caelan Doris both did our syndesmosis on our ankles [against Clontarf],” he remembers. “That came before the World Cup. I think  that was the last game I played for ’Marys. So to be where I am now, I couldn’t have asked for any more.”

One difference Larmour brings is he has a step off both sides. It’s a precious asset he can perfect but not one that can be coached to every player. The balance and centre of gravity to flat-foot defenders at pace is not contained in manuals. Simon Zebo knows all about cause and effect of stepping after James Lowe demonstrated it last week.

But Larmour’s head is not for turning. Like Andrew Porter, James Ryan or Max Deegan, he’s too busy moving forwards to reflect.

“My step and things like that is my strength so I definitely want to work on my strength,” he says. “I’ve been humiliated a fair amount in training. I’ll take it as it comes.

“I’ve never really thought about being different. I just kind of tried to do the best I can, be the best rugby player I can. When you get that opportunity you just want to take it.

“At the moment I’m doing a good bit of defence work with Hugh Hogan before training and after training, one-on-one stuff. All the coaches will come up to you and show video clips of what others players are doing, things to think about.”

The clash with Scarlets represents another opportunity against the Welsh team who beat Leinster in last year’s semi-final. Larmour is breaking more new ground.

“I was in the stand watching it with a few of the Academy boys,” he says. “We had a barbecue before it.”

In rugby years, like dog years, that’s aeons ago.

Buckley and Sligo ready to throw down gauntlet to the champions 23:00
Flanagan and O’Donovan named in Limerick side to face Galway 22:40
Klopp warns players not to use his complaints over schedule as an excuse 22:34
Mourinho claims spending brings pressure as he travels to Chelsea 22:30
Late Wilson and Joelinton goals help Newcastle storm Palace 22:20
Here is your handy guide to sport on television this week