Matt Williams: Beautiful obsession starts with children falling in love with the game 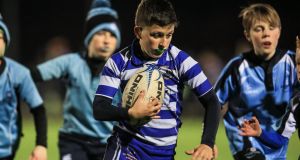 Those under-12 players made me remember how much fun I had playing the game and how much I loved it. For me that joy of playing morphed into an obsession. Photograph: Gary Carr/Inpho

I am spending Christmas in Sydney, my home town. The Emerald City is baking in 40 degree heat, with bush fires raging around its parched peripheries, as the eastern states enter their sixth year of a devastating drought. I can promise you there are no sleigh bells ringing.

As a boy in Sydney, my sweltering Christmas morning had a strange ritual. Rugby practice.

When I was about 14 I read a quote from the legendary coach of the Green Bay Packers NFL team, Vince Lombardi. Uncle Vince said: “Keep this thought in mind: When you’re not practising, someone, somewhere is; and when you meet him in competition . . . he will win.”

In my obsessive, overly competitive, “weirdo” adolescent mind, I decided a session early on Christmas morning was when the other guys would not be practising. I took confidence from my stupidity.

Many years later I embarrassingly recalled this obsessive behaviour, to some fellow rugby weirdos. I was greeting with sheepish expressions as every one of them admitted to doing the exact same thing on Christmas morning.

Obsessive behaviour in sport, science and the arts is unusually common.

Before England played Ireland in the 2003 Six Nations decider at Lansdowne Road, Dave Alred, the great English kicking coach of Johnny Wilkinson, called me to ask if they could use the Leinster training ground at Old Belvedere for a kicking session the day before the match.

Alred and Wilkinson worked together for over two hours on every imaginable style of kick. I was amazed at the volume of kicking Wilkinson was capable of performing less than 24 hours before a match. It was obvious he had done this on most days over many years.

Jerry Rice, one of the greatest wide receivers in the NFL, played for the San Fransisco 49ers. He counted the exact number of steps he had to take to reach an exact spot, where he would change the angle of his running, in every one of the many routes he had to complete, before receiving the pass from his Hall of Fame Quarterback, Joe Montana. Almost 30 years after he has stopped playing he can still remember the exact number of steps and the angle of each play.

Thomas Edison’s obsession to invent the light bulb literally failed hundreds of times before the faint glow of an electrified element radiated out.

The Wright brothers obsessively spent years building, crashing, modifying then rebuilding gliders before adding a primitive engine to their creation. They conquered gravity for 37 metres at Kill Devils Hills near Kitty Hawk beach, this week 116 years ago.

As I began writing this piece, I was sitting inside an Airbus A 380, 10 kilometres above the Indian Ocean, flying for over 12,000kms. Testimony to a century of human obsession with flight.

Obsession is healthy when it is fuelled with a deep love of what you do.

A good friend of mine was trained as a concert pianist at the Conservatory of Music in Paris. To me the demands of her training bordered on the inhumane. The hours of daily practice, the pressure from exacting professors and the extreme competition between students appeared toxic.

Yet she regarded it as a gift. The hours of daily practice empowered her to play the great works. The exhilaration in mastering the complexity of the music was the reward for her competitive nature and her burning desire to succeed.

A much-loved obsession, driven by competitiveness. Now that is a potent concoction.

Sadly many parents are forcing children into high levels of structured coaching programmes, thinking this will make the child into an accomplished sportsperson, musician or dancer. This is so very wrong. Many of the industries based on child sports coaching, academic instruction, music teaching and dance tuition are powered by the ego of parents and the misery of children.

There is an alarming statistic that, in parts of America, high security prisoners in penitentiaries have more free time than children over the age of eight. Before any intense instruction, children have to fall in love with what they do. Be it sport or art.

If you want to encourage your child to excel in sport, turn off the TV, lock up the phones and tell the kids to go outside and play. Play is where fun and imagination spark the passion within the child.

Last Saturday at the Aviva I was standing near the under-12 teams as they waited in the tunnel to play at half-time during the Leinster match. There was excitement and wonder on the players’ faces. They knew they were embarking on an adventure that was serious fun. They were going to play.

Those under-12 players made me remember how much fun I had playing the game and how much I loved it. For me that joy of playing morphed into an obsession that, just like my piano playing friend, has been a lifelong gift. You see not all obsessions are bad.

So if you are a fellow obsessive, who has to get up early on Christmas morning to practice, because you have an overly developed competitive complex and a deep-seated anxiety that if you don’t practice some other bugger will get in front of you, take heart. You are not alone.

There are lots of obsessive, overly competitive weirdos out there, just like you and me. Wear it as a badge of honour.