Rory Scholes one of seven Connacht changes for Dragons trip 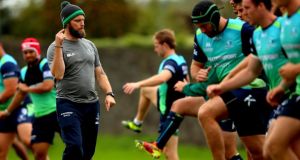 Connacht head coach Kieran Keane has made seven changes to the team that secured a bonus-point win against the Southern Kings last week, as his team travel to Rodney Parade to take on Newport Gwent Dragons on Friday night.

Rory Scholes, Caolin Blade, Denis Coulson, Conor Carey, Quinn Roux and Jake Heenan all come into the side for their first starts of the season as Eoghan Masterson comes back in for his second start.

Scholes is set to make his competitive debut for the province on the wing in place of Matt Healy.

Blade is included in the side at scrumhalf in place of Irish international Kieran Marmion, who is named among the replacements.

The other five changes are in the pack with two alterations in the front row. Coulson makes his first start for Connacht at loosehead prop after coming off the bench to make his debut in the win over the Kings with Carey starting at tighthead prop.

Ireland international Roux and Heenan also come into the side for their first starts of the season with Roux in the second row and Heenan in the back row.

Masterson, a try-scorer off the bench last week, replaces the injured Sean O’Brien.

With six points from two home games, Connacht are on the road for the first time this season in Wales and assistant coach Nigel Carolan is not underestimating the challenge posed by Bernard Jackman’s Dragons side.

Speaking to reporters earlier this week, Carolan said: “Bernard Jackman is trying to rebuild the Dragons and create a strong identity, much like he did in Grenoble.

“They will be a tight-knit group and very difficult to play against. They have some real firepower with Ashton Hewitt, Zane Kirchner, and the boot of Gavin Henson. It is going to be a very difficult game for us and we have to make sure we build on last week and are more effective than we were against the Kings.”

1 Gerry Thornley: Saracens very late to apologise for repeated cheating
2 Conor McGregor hails Donald Trump as ‘USA goat’
3 Champions Cup final: How to get there, how to get tickets and more
4 As the UK tightens gambling laws Ireland still lags way behind
5 Shane Lowry agreeing to play in Saudi Arabia is an unfortunate choice
Real news has value SUBSCRIBE