Wales captain will miss clashes with All Blacks, Australia and the Springboks 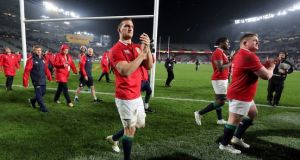 Cardiff Blues and Wales star Sam Warburton is to undergo surgery following the recurrence of a long-standing neck injury.

The Blues said that former Wales skipper Warburton, who captained the British and Irish Lions in New Zealand this summer, faces up to four months out.

The Blues said that 28-year-old Warburton had “exacerbated” the injury in training this week.

Warburton had yet to make his first appearance of the season after a post-Lions break before returning to training.

“The Cardiff Blues flanker, who led the British and Irish Lions to a drawn Test series with New Zealand in the summer, exacerbated the injury in training this week.

“He has undergone scans and has been reviewed by a consultant, who confirmed the management plan.

“It is likely that Sam will miss a period of up to four months.”

Flanker Warburton has played 74 times for Wales and led the Lions on their last two tours — Australia 2013 and then New Zealand.

His absence is a huge blow for the Blues and Wales, with Warburton set to have been a key part of national head coach Warren Gatland’s Test plans in November and December.

Wales launch their autumn series against the Wallabies in Cardiff on November 11th, before hosting Georgia, then the All Blacks and finally South Africa on December 2nd.

Ospreys and Lions flanker Justin Tipuric would be the clerar favourite to wear Wales’ number seven shirt in Warburton’s absence.

The current recovery timescale, though, indicates that Warburton will be available for Wales’ Six Nations campaign this season, which they kick off against Scotland on February 3rd.

For the Blues, Warburton’s absence comes after they recently lost the services of his fellow flanker Ellis Jenkins for up to 12 weeks because of a serious hamstring injury.