Ulster will have to contain Scarlets’ onslaught, says Peel 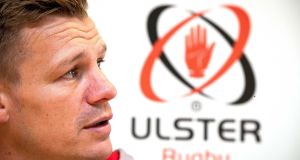 Ulster assistant coach Dwayne Peel: “It is going to be a tough, tough game for us.”

Any sentiment attached to the occasion will be reserved for a post-match beer and catch-up with old friends and ex-teammates, but, for 80 minutes on Friday night at the Kingspan stadium, Dwayne Peel will be doing his utmost to ensure an Ulster victory over the Scarlets.

The 36-year-old former scrumhalf joined the Irish province from Bristol, where he spent two years playing and last season as the backs/skills coach, a role he now fulfils with Ulster.

However, from 2000-2008, Peel played with the Scarlets and their previous incarnation Llanelli before switching to the Sale Sharks. He won the majority of his 76 Welsh caps while at the old Stradey Park and also played all three Tests for the Lions against New Zealand in 2005.

“I spent most of my career there as a player and, as a fan from [the time I was] a kid. It is going to be a tough, tough game for us, no doubt they are the form team at the minute and have been for last couple of months, really.

“They’re playing some good rugby, were deserved champions last year, and they have started well with two good wins in their first two games [against Zebre and Southern Kings]. It’s a big challenge for us but we’re looking forward to it and to see where we are at really.

“Obviously you have to contain them. They are playing good rugby; attacking-wise they are very good; in terms of us we have to make sure we do not feed that, we do not give them a loose ball to play off and when we get opportunities to try and take them.

“It is as basic as that. I just think they are coming here as the form team in the competition and it is up to us to try and contain them and try and impose ourselves on them.”

Ulster will be without two of their marquee signings in Marcell Coetzee (bruised knee) and Charles Piutau (tight hamstring) both of whom are expected to be available the following weekend against the Dragons.

The home side won’t have their Lions contingent back for another fortnight or so, unlike the Scarlets, who should be able to call upon summer signing Leigh Halfpenny, Jonathan Davies and Ken Owens for Friday night’s game.

Peel is diplomatic with regard to the constraints imposed by the Irish player management programme. “You cannot rush them back too soon because you risk losing them at the end of season or having that potential burnout towards the end of the season.

“It has to be individualised, it has to be right for the player first and foremost, and every player has to be right to come back in. In other words, if he is not right mentally or physically it does not help the team in any way. If a player is fit and healthy, and mentally fit, as well and fresh, that is the biggest thing.”

Peel made his decision to join Ulster from Bristol based on what he saw as a great opportunity. His experience as a player guaranteed a familiarity with the club and the city having occupied the away dressing-room on many occasions. He also looked at the playing roster and that had its attractions too.

The Welshman hasn’t been disappointed, and, with his young family settling well in Belfast, it has allowed him to concentrate fully on his coaching remit. Alongside head coach Jono Gibbes, they have brought fresh pairs of eyes under the general control of director of rugby Les Kiss, and, as Peel explained: “One thing that is certain – we are in it together and we are focused on where we need to get to.”

Given his background as a player, Peel was asked about Ulster’s new scrumhalf John Cooney, who arrived from Connacht during the summer. He admitted: “The Cheetahs week and last week [against Treviso] I thought he was good, some of his support play and his basic skill was good.”

The disappointment of the second half performance in Italy last weekend, when Ulster failed to garner a four-try bonus point, can’t be allowed to linger. The arrival of the defending champions, the Scarlets, at the Kingspan stadium is as rigorous an examination as any, and, as Peel conceded, Ulster players, coaches and supporters will know more about their current wellbeing after Friday night.