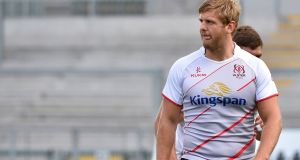 Chris Henry returns to the Ulster XV and will captain the side for Friday’s Pro14 clash against Scarlets at Kingspan Stadium, which will be played five years to the day since former Ulster player Nevin Spence passed away, along with his father Noel and brother Graham.

The latter pair will join Rob Herring, Wiehahn Herbst and Kieran Treadwell in the front five, while Ulster were forced into a late change to the team when Jean Deysel was withdrawn after sustaining a minor eye injury in training. Matty Rea will now start on the blindside flank and Sean Reidy moves to number eight, with skipper henry making up the backrow. Clive Ross has been added to the replacements.

John Cooney, man of the match in Saturday’s win versus Benetton Rugby, will line out at scrumhalf with Christian Lealiifano again named as his half back partner. Marshall comes in to wear the number 13 jersey, outside Stuart McCloskey in an Irish international midfield.

There are no changes to the back three as Andrew Trimble, who crossed for two tries against the Italians last weekend, is retained alongside Jacob Stockdale and Louis Ludik.

Paul Marshall, Peter Nelson and Tommy Bowe, with 386 appearances between them, will provide experienced backline options for Kiss and his coaching team.

1 Andy Farrell hands Billy Burns first Ireland start against Georgia
2 ‘God is dead’: The world’s front pages remember Diego Maradona
3 Keith Duggan: Through the glories and the disgraces, we were all Maradona addicts
4 GAA Statistics: Can Cavan and Thomas Galligan beat Dublin with the long kickout?
5 All bets are on as America opens the gambling sluice gates and the dollars flow
Real news has value SUBSCRIBE