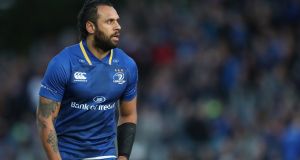 Isa Nacewa (pictured) and Jamison Gibson-Park are to return to Ireland having been denied entry into South Africa due to visa regulations. Photograph: Billy Stickland/Inpho

In an embarrassing scenario for Leinster and the newly expanded Guinness Pro 14, Isa Nacewa and Jamison Gibson-Park have been denied entry to South Africa due to recently altered visa regulations concerning New Zealand nationals.

Nacewa and Gibson-Park were held at Johannesburg’s OR Tambo airport on Wednesday morning after Leinster’s squad landed on an Air France flight from Paris just before 10am (9am Irish time).

Both players will return to Dublin as soon as possible with scrumhalf Nick McCarthy joining a now reduced 27-man panel.

The Pro 14 made no comment yesterday but The Irish Times has confirmed that all travel, and therefore knowledge of visa requirements, is the responsibility of individual clubs.

Amidst the time constraints in being the first European club side to play competitive rugby in South Africa – Leinster’s now significantly weakened side face the Southern Kings this Saturday at Nelson Mandela Bay stadium in Port Elizabeth – special visas for New Zealanders were overlooked.

Also, it remains unclear if New Zealanders need to apply for South African visas in New Zealand or whether it can be done from abroad.

In October the New Zealand government withdrew their visa waiver, citing the number of South Africans who were exploiting the agreement to visit family and friends, rather than travelling for tourism or business, and then overstaying the three-month limit.

“Therefore,” said Gigaba, “in view of the aforementioned, a decision was taken to reciprocate by withdrawing the visa exemption which New Zealand passport holders enjoy.”

Irish, Italian and British passport holders do not need a visa to enter South Africa.

Leinster head of operations Guy Easterby is with the squad on tour.

They are not due to travel to Bloemfontein until next Thursday, with the intention of avoiding altitude sickness, ahead of their game against the Cheetahs on Friday week.

“Leinster Rugby can confirm that both Jamison Gibson-Park and Isa Nacewa have not been granted a visa at this point in time and will as a result return to Dublin at the earliest opportunity,” read a statement. “Nick McCarthy has been called up to the touring squad as a result and will arrive tomorrow. Leinster Rugby will be making no further comment on this matter.”

While this appears to be nothing more than a logistical error, and a harsh lesson learned, making no comment on the matter may prove difficult over the coming days.

George Ford and England wary of possible Welsh backlash 06:00
Ian O’Riordan: Debate on return of competitive running starts fast and stays hot 06:00
Ireland out to put things right against Georgia side trying to make a point 06:00
It’s good to have Richie Hogan back, he was missed 06:00
David Humphreys: Georgia simply can't be dropped in at the deep end 06:00
Here is your handy guide to sport on television this week