Rob Kearney, Dan Leavy, Devin Toner and Scott Fardy among those not travelling 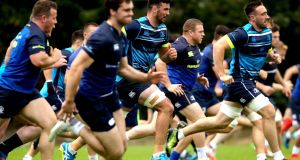 The Leinster squad going through their paces at training at UCD, Dublin. Photograph: Ryan Byrne/Inpho

Leinster’s chances of emerging successfully from a two-match tour to South Africa where they will play Guinness Pro14 sides the Southern Kings and the Cheetahs have been hit by a number of injuries and unavailability in the 28-man squad announced by head coach Leo Cullen.

Fullback Rob Kearney (hamstring) and backrow Dan Leavy (ankle), both injured in last weekend’s victory over the Cardiff Blues have been ruled out, as have the starting secondrows from that match, Devin Toner and Scott Fardy. Both players’ wives are are expecting a first child in the next few weeks.

The absence of Toner, who made his 200th appearance for Leinster last weekend, and Australian international Fardy, is compounded by the fact that another secondrow, Ian Nagle, is sidelined for the next 12-weeks following a procedure on a pectoral muscle picked up in training.

Cullen will be hoping James Ryan, Mick Kearney and Ross Molony can fulfil the secondrow duties between them over the two games, although Rhys Ruddock has played there in the past, albeit in a limited capacity.

Leinster are still a fortnight to three weeks away from reintegrating their Lions contingent in a match environment while Jamie Heaslip (back), Richardt Strauss (knee), Péadar Timmins (quad) and Garry Ringrose (shoulder) are at differing stages of their rehabilitation. Tom Daly (knee) is a long-term absentee. The injury profile makes the trip to South Africa more difficult even allowing for the miserable performances of the Cheetahs and Southern Kings on the opening two weekends of the Pro14.

Leinster assistant coach John Fogarty said: “We’re the first club to go over [to South Africa] so I guess we are preparing for what they have shown. When we get there how they approach it we’ll see. Sometimes you play teams at home and you play them away and it’s night and day. We’re preparing for what’s in front of us.

“They have had huge challenges. Coming into this competition you can understand where they are coming from and how they have to make adjustments. I think when they get home it will feel a lot better. It’s been a tough couple of weeks for them.”

When Leinster return home from South Africa they face an Edinburgh side rejuvenated under Richard Cockerill and then Munster at the Aviva Stadium before switching attention to the Champions Cup.

Fogarty added: “These two games are bloody important now; they sit in a really important place so that when we come home we can readjust. There will be a group here that will be likely to be involved when we come home, we need to build cohesion and we’ve got to get it right. “We’re not overly happy with how we performed against Cardiff, I certainly am not. It worked out in the end with some nice bits, but we put ourselves under pressure when we didn’t need to and then we started to force things.”

Stuart Lancaster will return on the Thursday before the Cheetahs match to work with some of Leinster’s Lions players as they edge closer to a return to competitive rugby.