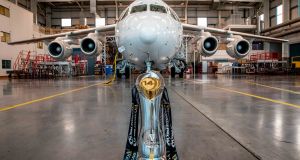 In previous times, hiring a charter plane could cost in the region of €15,000-€20,000. Photograph: Morgan Treacy/Inpho

The organisers of the Pro14 will reveal the fixtures for the first 11 rounds of the 2020-21 campaign, which begins the weekend after next, this afternoon.

The two conferences will remain the same as last season and the initial 11 rounds, taking the tournament up to early January, will not feature any South African teams.

Until such time the South Africans do or do not return in whatever guise in 2021, the 12 teams from Ireland, Scotland, Italy and Wales will play each team from both conferences over the first 11 rounds following approval from the relevant governments and unions.

However, in order to complete those fixtures, each squad will be obliged to travel separately from the general public, which will mean hiring private charters. In previous times, hiring a charter plane could cost in the region of €15,000-€20,000, which would have been met by the participating provinces or clubs. Nor will they be able to sub-let seats as they might have done in the past.

Admittedly, hiring private planes usually reduces the cost of accommodation although clearly the participating provinces and clubs will need to be subsidised by governments given the ongoing absence of paying spectators for the foreseeable future.

However – the alternative is to cease playing and whatever else – the show must go on.

It could be that the South African Rugby Union (SARU) will put forward a new or existing franchise to replace the Kings, who have gone into liquidation, alongside the Cheetahs. Another option being considered is that four Super Rugby franchises will be co-opted into the tournament pending a meeting of their general executive council next week.

Any South African participation in the competition hinges on the degree to which the country can overcome the coronavirus pandemic and the ensuing resumption of professional rugby and the lifting of travel restrictions.

The SARU will be desperate to restart rugby in South Africa to some degree and rejoin the Pro14, not least in honouring television deals such as that with SuperSport, which has the rights to broadcast Pro14 matches, and with next year’s Lions tour in mind.

Clearly the South African sides will not be able to complete the same number of fixtures as the other teams although this anomaly is offset by them not eligible to qualify for the Champions Cup and European Challenge Cup.

Following trial matches in Pretoria this weekend, and the “Springbok Showdown” in Cape Town a week later, the seven provincial teams will begin competing for the Vodacom Super Rugby Unlocked and the Currie Cup from October 10th.