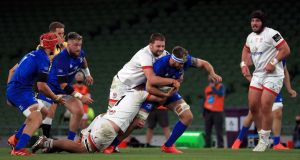 Developing an aerial game with the odd mistake handsomely repaid by a rare ability to seek and destroy any isolated defender. Something special is due.

Took a little longer than Blackrock teammates Joey Carbery and Caelan Doris to break into the Leinster team but a sojourn on the Sevens circuit merely completed his development into a multi-tasking modern winger.

Almost the finished article. One of the few Ireland stars to show up at the World Cup, you get the feeling that Jack Goodhue will be the last opposite centre to outdo him for a few years.

Intercept try to kill off Ulster in the Pro14 final felt like an instant reaction to Bundee Aki’s bulldozing form for Connacht. The young version always rose to the occasion and the veteran is no different. Nearing peak performance.

Put the Irish born wingers on high alert since becoming eligible for national selection with a power game and work rate that brings an extra dimension to any attack. Also improved his defence.

The captain returned from lockdown noticeably bigger and besides all the strategic supremacy, that we all take for granted, he recently stood up and dispossessed Damian de Allende in a show of genuine strength.

That zippy pass by Jamison Gibson-Park to create Lowe’s try against Ulster puts a little pressure on McGrath, who equally provides a real alternative to Conor Murray’s nine-year reign as Ireland’s starting nine.

Covid allowed the hip to heal before a titanic scrum duel with a Springbok tighthead but Ireland’s greatest ever loosehead is keeping Father Time, and all the other props, under his thumb.

Ronán Kelleher’s lineout inaccuracy gives Cronin, the old Limerick war horse, a chance to prove that Sexton is not the only 30-something with plenty more in the tank.

Any other club would be plunged into crisis after losing two young tightheads to other provinces along with their Lions starter (Tadhg Furlong) being laid up with back problems. Not Leinster, not with Porter at the ready.

Ryan Baird must be putting enormous pressure on this selection call but Toner still looks the part and remains the key figure in a lineout that needed emergency surgery during the week.

Miraculously seemed to grow into last week’s final - despite recent and rapid recovery from shoulder surgery - so we imagine he will be tuned up to break even with Itoje. Then again, nothing Ryan does should come as a surprise.

The blindside project accommodates Jack Conan for Leinster and possibly CJ Stander for Ireland but the best number eight in the country is on a direct course to become the alpha dog regardless of his position.

Connors is so effective at felling the big trees - Billy Vunipola being his primary target - that Josh van der Flier is benched for the biggest game of the season while Dan Leavy cannot get a look in. Sensational of late.

A couple of errors in the Pro 14 final allowed people to gloss over his team leading 20 tackles and 11 carries as, on review, we see one of the Ireland’s best players in 2019, before a nasty foot injury, back and fully charged.