Leinster have the edge on Saracens in battle of the benches 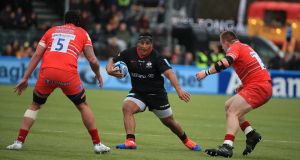 Mako Vunipola is in line for a big shift against Leinster on Saturday if fit to play. Photograph: Andrew Redington/Getty

If Saracens win the European Champions Cup next month, they will not stand accused of breaching the Premiership’s salary cap regulations. They have a significantly weaker squad since the season’s resumption and if they fail against Leinster in Saturday’s quarter-final at the Aviva Stadium, the strength of the respective benches may be a telling factor.

Even for a team of Saracens’ togetherness, achievements and pedigree, this is bound to tell, especially at the latter stages of a tournament that is far closer to Test level than the Premiership. Leinster’s bench will bulge with capped players: Scott Fardy, Luke McGrath and Jonny Sexton were among their replacements in last Saturday’s Pro14 final against Ulster.

Saracens will need Leinster, whom they defeated in last season’s final in Newcastle, the last occasion they failed to win a match, to make as slow a start as they did against Ulster because it is hard to see their bench making a difference in the final quarter as it has for them so often in the past.

In recent years, replacements have been given different names to give their role a more positive, inclusive flavour. The England head coach, Eddie Jones, came up with finishers, although it bore comparison with non-starters, while Harlequins plumped for game-changers, which was surely not what they required if they brought players on while leading.

Whatever the appellation, benches often make a difference but Saracens will rely more heavily on their starters than Leinster and Richard Wigglesworth, Jamie George, Mako Vunipola, if he plays, and Vincent Koch will, if the game is close, stay on for longer than they would otherwise while Leinster will have no such inhibition.

The needless loss of Farrell is something the Saracens’ director of rugby, Mark McCall, will not have budgeted for. He has the option of Alex Goode or Manu Vunipola at outside-half: the first option deprives him of his leading full-back and the second would mark the biggest match in the short career of a 20-year old who started four of this season’s pool matches.

Vunipola is an example of how Saracens have evolved in the past 25 years and they are similar to Leinster in the way they prefer to grow their own rather than swamp their squad with ready-made, high-profile recruits from abroad. They still scope the globe, but a club that once imported Tim Horgan, Francois Pienaar and Thomas Castaignède is now more discerning.

In recent years, they have brought in Will Skelton, Vincent Koch, Titi Lamositele and Juan Figallo, identifying what they need and whether the player will fit into a singular club rather than looking no further than the name. Schalk Burger was different, but he was someone coming to the end of his career who was milked for his knowledge.

Leinster’s current overseas recruits are James Lowe, Scott Fardy and Jamison Gibson-Park. They have 39 caps between them, all belonging to the Wallaby Fardy, following the example of Isa Nacewa, who after making a solitary international appearance for Fiji made nearly 200 appearances for the province in two stints.

Leinster and Saracens use overseas recruits to supplement homegrown talent. Their marquee players come from within rather than without and while Saracens have paid a considerable price for serial breaches of the Premiership’s salary cap regulations, their wrongdoing was not boosting the pay packets of expensive imports but devising a way of enhancing the earning capacity of England players who had either come through the club’s ranks or joined early in their senior careers.

It did not make it right, but an issue with a group of players breaking into a senior team at around the same time and going on to be capped by England is that it substantially increases the wage bill and Saracens, looking to compete in Europe, opted to flout the rules and were eventually rumbled. It earned them success in the Champions Cup, but they will not be competing in the tournament after this season for at least another two years (and it remains to be seen what would happen should the delayed start to the Championship campaign stretch into the new year and lead to its cancellation).

Leinster have a budget rather than a cap to work within. If it gives them an advantage over Premiership sides, they spend less on wages than some French clubs who, in the main, have struggled to battle on two fronts. The Top 14 sides are taking World Rugby to court for granting six “friendly’ international windows this year, even though it is the same as when the World Cup is not being staged.

If they prevail, chaos beckons. Leinster and Saracens have dominated the Champions Cup in the past four years, taking over from Toulon who, under Mourad Boudjellal, spent big and enjoyed success. Yet he was an owner who publicly criticisedJulian Savea and Ma’a Nonu for not producing the performances he expected after lavishing hundreds of thousands of euros on them.

Is the game to be run inclusively worldwide or fall victim to the whims of those with deep pockets who buy their way into a sport many are unfamiliar with? Clubs need to be more involved in decision-making than they have been, but not to dictate and threaten. Leinster and Saracens provide greater models than any French club, investment rather than spending. - Guardian