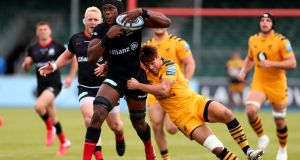 Better suited to sweeping and counter attacking from fullback as opposed to coping with Ringrose and Henshaw in a chaotic midfield. Beware: anything from 55 metres is inside his kicking range.

Big winger moved to Saracens in 2018 after five years with London Irish where he was a standout performer in the Championship, a level he never thought he would revisit in a black jersey.

Seriously quick but injury prone centre who completes the redesign of Sarries midfield due to Owen Farrell’s suspension. Man marked Ringrose in Yokohama last year so both men know each other’s weaknesses.

Saracens’ defensive lynchpin but Robbie Henshaw should be another level up from this South Africa native who has not been capped by England since 2015.

The Scottish Kiwi is a lethal finisher, a threat in the air, quick and powerful in equal measure. Hugo Keenan is tasked with locking him up tight in all the above departments. Some task.

The Farrell conundrum has led to Mark McCall risking the fullback at number 10 over England under-20s outhalf Manu Vunipola. A slick footballer, with a lovely kick pass, he must be ruthlessly targeted.

Replaces Ben Spencer, who switched to Bath to flatten the salary cap, this occasional Welsh international will be expected to produce the hour of his life before 37-year-old Richard Wigglesworth arrives.

A pivotal figure in the Saracens story - Nigel Wray helped him start Wiggy9 Investments - and despite his age a shock victory would revolve around his astute game management.

One of the most effective and mobile props to ever play the game, remarkably still only 29, he has been cursed by injury but Saracens need him to recover from back spasms to put Andrew Porter through the ringer.

Tough season ahead for the England and Lions hooker as Sarries relegation to the championship puts his selection for both international sides under real threat. This could be the last shop window for some time.

World Cup winning Springbok caused Leinster all sorts of problems in last year’s final and he should give Cian Healy a rigorous, back bending examination in the scrums

The best lock on the planet, or certainly in the conversation alongside Brodie Retallick, Maro must somehow enhance the damage he causes at rucks and in the tackle now his England partner George Kruis has decamped to Japan.

Ideal veteran for a quick dip into the championship but the Scottish international comes out of retirement to find himself on the biggest club stage of all. Sarries will badly miss Kruis and Will Skelton.

The South African is a genuine stalwart of the club since arriving from the Stormers in 2015, and will be used to disrupt the Leinster lineout. Important figure if Sarries are to prevail.

Part of the furniture since coming through the Academy in 2008, without ever reaching an international peak, Wray will be tasked with chopping down Jack Conan and Caelan Doris before any yardage can be made.

Came up short of being considered the best number eight in the game when faced by Duane Vermeulen in the World Cup final. That said, Leinster could not stop him from five metres in last year’s Champions Cup decider at St James’ Park.

1 Return of Conor Murray’s box kicking could exploit French vulnerability
2 Jim McGuinness: GAA offers a great distraction after return from the US
3 Here is your handy guide to sport on television this week
4 Sam Bennett struggles as Roglic wins Stage 10 of Vuelta
5 History suggests England should keep their part of the bargain
Real news has value SUBSCRIBE