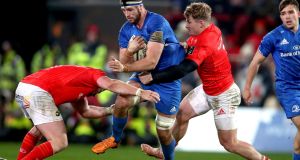 Leinster’s Caelan Doris is tackled by Dave Kilcoyne and Chris Cloete of Munster during the Guinness Pro 14 game at Thomond Park in December 2019. Photograph: Bryan Keane/Inpho

Five months after sports shocking shutdown the Aviva stadium reopens to a complex yet equally simple tune: red versus blue locked in a dance that symbolises everything good and plenty that is nasty about Irish rugby.

Leinster and Munster are together again, albeit with some fascinating new ingredients. World champion Springboks RG Snyman and Damian de Allende are the novel attraction.

The rest you know well. Johnny Sexton and Peter O’Mahony will do all the talking with referee Andrew Brace.

The viewing public only needs to nestle into the couch. Gather the household and six trusted comrades or, better still, slip down to the local bar and grill, order the special of whatever and gobble some interprovincial action whole.

Pub warning: due to the Government’s 105-minute rule, maybe sacrifice the preamble to ensure you get to witness the end game. The chances of Ryan Baird throwing down with RG Snyman, like ice hockey enforcers, from kick-off seems unlikely.

You never know. Leinster coach Leo Cullen ever so gently stirred the pot ahead of welcoming this newly stocked Munster gang to Dublin.

“I am sure Munster have a little bit of that [Springbok aggression], as there are lots of South Africans in their squad now, whatever the number is, some starting some off the bench, and they have a big physical presence,” said Cullen when asked to compare and contrast. “It is important that we are able to get to that same level and try to match it and get beyond the physical level those guys bring.”

That’s the blue line in the grass; Leinster will seek to overpower Munster – as has been the case in recent times – despite the arrival of the gargantuan Snyman.

For the record, Munster coach Johann van Graan has named five fellow countrymen in the matchday squad as De Allende and Snyman start alongside CJ Stander with Jean Kleyn and Chris Cloete on the bench.

Leinster put their trusted Trans-Tasman duo Scott Fardy and James Lowe out to bat but the event itself overshadows all this pre-match muscle flexing.

“It is a huge occasion,” Cullen agreed. “We will all miss the supporters . . . but I’m dying to get going now because the training is all very well but what we really want is to see the fruits of our labour on the field.

“I can’t wait now, it’s going to be a very unusual day out with all the different bits that are going on in terms of social distancing on the sideline.

“An incredible amount of work has gone on behind the scenes to get us to this point and I guess for us as players and the coaching staff, we’ve in many ways had to take a back seat in terms of people who have been working hard operationally and from a medical point of view to ensure things are as safe as possible.

“But, from our point of view, it’s trying to get back to what we love doing which is preparing the team and for the players to actually get out there playing.”

Even Cullen cannot hide the nerves that come with the enormous anticipation of needing to put the Irish rugby train back on its tracks.

Connacht and Ulster follow in the slipstream of rugby’s first day out since the virus took hold.