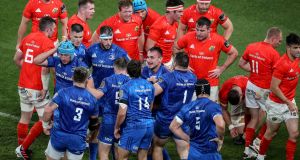 Matt Williams: Winning is a habit that has Leinster addicted to the juice that lifting trophies creates. Photograph: Dan Sheridan/Inpho

This week, the words of my friend and great coach Mike Ruddock are ringing in my ears. When preparing teams to play in knockout matches Mike reminded his players that “in a Cup Final a 1-0 win will do.” He added in his lilting Welsh accent that, “what has happened during the rest of the season is in the past. It’s irrelevant. All we need is 1-0.”

Mike’s vast experience correctly taught him that in the pressure of a final, past form is not always a guide to who will win on the day. If an underdog team, like Ulster, can create momentum against a team who are red hot favourites, like Leinster, then frustration can set in.

Momentum and frustration are the essential ingredients in creating a good old fashioned “boil over,” upset win.

Across the sporting globe, the history of finals is littered with miraculous wins by underdog teams.

In the 1969 Australia Rugby League Grand Final, one observer described the Balmain Tigers, as a team of “Neville nobodies.” Those “Nevilles” out-thought, out-scored and defeated a South Sydney Rabbitohs team packed with international greats.

In the 1973 FA Cup Final, Sunderland, who were languishing in the English Second Division defeated Leeds, who were the defending holders of the FA Cup.

The New York Giants had an ordinary 2008 season and scraped into the playoffs with a 10-6 record. Led by Quarterback Eli Manning, they then not only reached the Super Bowl but defeated the all concurring New England Patriots 17-14.

The crucial element of winning against great odds is that it does not matter what the world thinks, all that matters is the belief in the minds of the players

At Twickenham in 1991 the Wallabies stole the William Webb Ellis Trophy from under English noses. England inexplicably imploded in the World Cup Final after completely changing their game plan and attempted to play running rugby for the only time in the teams’ history. The English gloriously failed.

That day, Bob Dwyer, the Wallabies coach, was rather unwisely placed in a seat adjacent to the Royal box containing Queen Elizabeth of England. In the dying moments of the match, with an unlikely Wallaby victory becoming more of a reality, the Australians regained possession close to their try line. Across a despondently hushed Twickenham Bobs voice boomed, “Kick it to the shit house.”

The late, great Australian Rugby President, Joe French, had to explain to Her Britannic Majesty that in Australia that meant “kick the ball as far as you can”.

Leo Cullen should remind his Leinster players of the inaugural Celtic League final in which he played a giant role. In the week leading up to the final the Leinster forwards were humiliated in the media, being described as vastly inferior to their Munster counterparts, who were unbackable favourites.

A first half red card triggered a heroic performance from Leinster’s forwards. The blue team then created some backline brilliance to do what everyone in Ireland thought was impossible and win.

Everyone, that is, except the Leinster players.

The crucial element of winning against great odds is that it does not matter what the world thinks, all that matters is the belief in the minds of the players. In all of these great upset victories the players deeply believed they could overcome the odds to win.

While the world thinks Leinster will win, tantalisingly, the Ulster camp believe they can create one of Irish rugby’s greatest upsets.

To have the faintest hope of winning the Ulster defensive system must not only stop Leinster’s forwards before the gain line, but create ferocious physicality at the tackle and force Leinster’s attack into errors.

Ulster believe that if they can disrupt Leinster’s attacking game plan, it will create pressure and frustration in the usually cool minds of the champions. Then, to quote Eddie Jones, that “pressure will be like a hungry dog that will get up chase them down the road.”

The bad news for Ulster is that defending is the easy part. Ulster’s only chance of winning is to have a mindset mantra of “attack, attack and attack again.” From the opening whistle, they have to “come out swinging” with the ball in hand.

Ulster will have gone to school on Munster’s failed offensive tactics. A game plan based around box kicking did frustrate Leinster but it did not defeat them. Munster proved that you cannot rope-a-dope Leinster, you must land attacking punches.

In last year’s European Rugby Champions Cup quarter-final at the Aviva, Ulster’s running game, dramatically disrupted Leinster. If Jacob Stockdale had not dropped a one handed put down over the try line, Ulster could have come away with a victory. Ulster knows their attack can hurt Leinster

Despite all this hope, the enormity of the challenge facing coach Dan McFarland’s team cannot be overstated. Leinster are not just good, they are exceptional. To be undefeated coming into this final is a performance so extraordinary it may never be bettered. They have been vastly superior to every other organisation in the competition. In this, the strangest of seasons, the quality of their play has simply been a joy to watch.

Leinster are the current undefeated champions. They are at home and they know how to win finals. Winning is a habit that has Leinster addicted to the juice that lifting trophies creates. All of those are powerful advantages for the men in blue.

While nothing is impossible in a final and Ulster have a sniff, tonight the champagne should be flowing in Donnybrook once again.

Mick Schumacher confirmed as F1 driver for 2021 08:34
Fans set for return to soccer and racing in UK as lockdown ends 08:28
Klopp praises Kelleher; IRFU’s Nucifora must answer questions 07:24
Jürgen Klopp impressed with ‘top talent’ Caoimhin Kelleher 06:49
Gordon D’Arcy: David Nucifora does not believe he is accountable to the Irish public 07:46
Here is your handy guide to sport on television this week