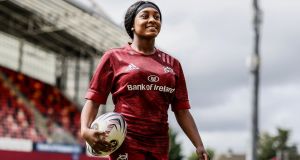 This has nothing to do with Canterbury’s failure to use a female rugby player to mark last month’s historic announcement that the same Ireland jersey and crest would finally be worn by both genders.

Nor has it anything to do with Canterbury’s farcical stance – about 48 hours before a “hands up” apology – that women could not be safely accommodated for a photo shoot, due to the pandemic, although Robbie Henshaw had miraculously managed to pose for promotional pictures. Conor Murray and Bundee Aki also made the cut.

The New Zealand sports clothing company’s “pledge” to never make the same mistake ever again will lead to a relaunch. Any day now.

Adidas design the Munster and Leinster jerseys. In June, two months before Canterbury’s PR disaster came into full bloom, somebody on the professional side of Munster reached out to Wendy Keenan, the progressive chairman of the women’s committee, about promoting their 2021 kit.

“We use our models of excellence,” laughed Keenan, “in terms of rugby excellence.”

The photo shoot was achieved in the middle of Covid without a single player being put at risk. Nobody needed to justify using female models instead of female athletes.

“A representative from the Munster corporate team rang me to put three girls forward,” explained Keenan. “Dorothy Wall was a little bit older but we also picked two girls from the winning under-18 interprovincial team.”

Using Meabh McElligott and Chisom Ugwueru – well known faces among the growing number of teenage girls attracted to rugby – was part of a deeper strategy.

“If you look at 2020, everything has been about ‘can’t see, can’t be.’ The young girls need to see a pathway they can follow, and if they recognise the girls at the jersey launch it is a motivating factor for them.”

This all sounds so obvious.

“Dorothy is our Irish player and I think she has a huge career ahead of her but the other two girls – Meabh and Chisom – for them to be seen is so important because young girls are seeing other young girls and not just players who have made it to the Ireland team.”

How on earth did they manage to arrange the shoot during the same time period that Canterbury felt the risk was too great to expose both genders to the threat of coronavirus?

“It was extremely well done. None of the players met each other between each shoot. Each player was allocated a slot at Thomond Park. We kept within the regulations.

“This is my third season as chair and the relationship between the professional staff and volunteers ensured an inclusive process.”

The Canterbury fiasco was exposed by the “I Am Enough” viral campaign, which equally showed the IRFU just how fed up its female players have become with such blatant inequality.

Even now, when seeking to purchase the Ireland jersey, Canterbury’s website has Henshaw, Aki and Murray up in lights with the new range of gear still superimposed onto models.

Click onto Lifestyle Sports and you find McElligott and Andrew Conway smiling back at you in Munster red.

This story, with all its negative connotations, can pivot into the work Keenan and other volunteers are doing to develop the underage structures in Munster. There is plenty of common sense attached to a pilot scheme that focuses on regional bases as opposed to heavy reliance on senior clubs like UL Bohs and Ballincollig to cater for growing numbers.

“What we are doing differently from the other provinces is we are taking a regionalised approach like the GAA do it,” Keenan explained. “For example, the Kerry entity has four clubs feeding into ‘Kerry Ladies’. The same will probably happen in the Tipperary area.”

Borrowing from a proven GAA methodology is a logical route towards sustainability of the game in Munster.

“It makes sense for us. I have been at IRFU meetings and people are looking at me going ‘what the hell’ but, you know what, we have tried the AIL structure and you need such a big player base, which is not there at the moment at adult level.

“We have put a lot of time and energy into our underage structures to ensure the clubs get a concrete foundation behind them before they can develop their adult team.

“Ennis is the big example of coming from the ground up. This will be their first season with an adult team. Chisom is from Ennis so that was important to have her wear the jersey at the launch.

“But she is also an excellent player.”

And that’s why Ugwueru is the ideal model.