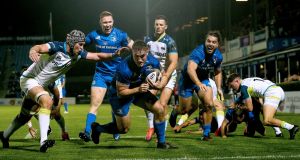 Leinster will be trying to engineer a 25th successive victory when they face Ulster in the Pro14 final at the Aviva stadium on Saturday night. Their most recent defeat dates back to last season’s Champions Cup final when they were beaten 20-10 by Saracens at St James Park in Newcastle. Leo Cullen’s side will have a chance to atone for that defeat when the two clubs meet again in a European quarter-final on Saturday week in Dublin.

If the Irish province does manage to complete this abbreviated season unbeaten it would elongate the winning sequence to 28 matches. Leinster put aside the disappointment of losing to Saracens last May with a 24-9 Pro14 semi-final victory over Munster at the RDS, the starting line for what constitutes a remarkable run of success. They followed it up by beating the Glasgow Warriors 18-15 in the final at Celtic Park.

In their 24-match winning streak the Irish province have scored 107 tries at a strike-rate of 4.45 per game while conceding 40 at 1.66 per match. Looking at the attacking side of things first, Leinster have scored five or more tries on 12 (50 per cent) occasions, the most, nine, in a 55-19 thumping of Glasgow in the last Pro 14 match before the lockdown.

They have crossed for eight tries on four occasions, twice for seven, three times for six and in a brace of matches managed five. There is only one team that prevented them from crossing the tryline and that was Michael Bradley’s Zebre, who succumbed 3-0, the game’s sole score at the Stadio Sergio Lanfranchi, a Ross Byrne penalty on 19 minutes.

It’s interesting to note that of the two teams to hold Cullen’s charges to a single try across three matches it was Munster that managed it twice, last weekend at the Aviva Stadium and at Thomond Park in the regular part of the season. The other occasion was the Champions Cup game at the Stade Mamut de Gerland in Lyon when Leinster squeezed home 13-6 in a Champions Cup pool match with Max Deegan scoring the try.

Leinster backs have accumulated 55 tries with three players contributing the lion’s share, or 56 per cent of that total to be precise. Wing Dave Kearney, who is rehabilitating a hamstring injury, leads the way with a dozen including two hat-tricks. Centre Garry Ringrose has 10, also scoring three tries on two occasions, while wing James Lowe is one behind on nine.

In all, 36 players have dotted down in the 24-match winning sequence, 18 forwards and the same number of backs. The frontrow union will be very happy with their contribution of 28 tries; an identical tally to the massed input of the wings. The four scrumhalves, Luke McGrath, Jamison Gibson-Park, Rowan Osborne and Hugh O’Sullivan have each contributed to the tally, while in terms of the Byrne family battle at outhalf, Harry (three) leads Ross (two) in the try-scoring stakes.

On the defensive side of the ledger, Leinster have managed not to concede a try on six occasions, three of those against Munster in two Pro14 semi-finals and the game earlier in the season at Thomond Park. Zebre, Benetton Treviso (Champions Cup) and Lyon (Champions Cup) also failed to register a try.

The team that scored the most tries against Leinster is Ulster, Saturday’s opponents in the Pro 14 final, who amassed six in a 54-42 try-fest at the RDS just before Christmas. Dan McFarland’s team were the only ones to register a four-try bonus point in Leinster’s 24-game winning run. Treviso (twice), Northampton Saints, Glasgow and Munster each managed three against the reigning Pro 14 champions.

Leinster scored the first try of the match in 20 of 24 games, the last try on 16 occasions and only twice did they trail at half-time; to the Glasgow Warriors in last season’s Pro 14 final and against the Ospreys at the Gnoll.

As far as this weekend is concerned the numbers that matter start and finish with those on the scoreboard after 80-minutes and the prospect of claiming what they hope will be the first of two trophies.