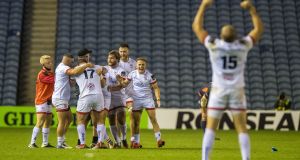 Three hundred and fifty long days after it started, the 2019-20 Pro14 season reaches a conclusion on Saturday evening, as Leinster take on Ulster in the final at the Aviva Stadium.

Ulster were 38-14 winners over the Ospreys back when the competition got underway on September 27th, 2019. The Rugby World Cup was in full swing in Japan, and we were all blissfully unaware of what was lurking around the corner in the new year. . .

They have won all 16 of their league fixtures, while six wins out of six on the continent mean they have gone 22 unbeaten this campaign. Their overall unbeaten run stands at 24.

Standing between Leinster and their latest piece of silverware are an Ulster side who are steadily growing and improving under the savvy leadership of Dan McFarland.

This is their first Pro14/Pro12/Celtic League final since 2013 – a real sign of progression, but they won’t be happy to settle for a runners-up medal.

The strangest season of them all is about to come to an end, with less than a month to go until the new one begins. The trophy is staying in Ireland – but will the ribbons be blue or white?

Here is everything you need to know.

The 2019-20 Pro14 final, between provincial rivals Leinster and Ulster.

Saturday September 12th at the Aviva Stadium – kick-off is 7.35pm.

Unfortunately not – the Pro14’s flagship fixture will be played behind closed doors due to the coronavirus pandemic.

The match will be televised free to air by TG4 in the Republic of Ireland. It will also be shown on eir Sport, but Virgin Media customers won’t have access due to an ongoing dispute between the two broadcasters. The Irish Times has contacted eir Sport to see if they will be streaming the fixture for free on their Facebook page, which they did for last Friday’s first semi-final.

You can also follow the action throughout via the Irish Times liveblog, which will be up and running from around 7pm.

Leinster swept all before them en-route to topping Conference A and setting up a semi-final showdown with Munster last Friday. It was a grim affair – “brutal” according to Leo Cullen – but his side ultimately ran out comfortable 13-3 winners, with Munster left to rue another big game in which they failed to show up.

In the other side of the draw Ulster produced a gutsy performance to come from 19-7 down and turn over Edinburgh in their own back yard. Ireland outhalf Ian Madigan was the hero at Murrayfield, holding his nerve to land a last-minute penalty as his side emerged with a 22-19 victory. Ulster had been sluggish since the restart, but their Scottish revival suggests a side coming to the boil at the right time.

Leinster have been handed a boost – not that they really needed it – with the news James Ryan is fit to start on Saturday night. He is yet to feature since the restart but the 24-year-old slots straight back into the starting XV. Dan Leavy and Tadhg Furlong are again ruled out and Ross Byrne has been named at outhalf with Johnny Sexton named among the replacements with an eye on the following weekend's clash with Saracens.

Meanwhile Dan McFarland welcomes Ulster captain Iain Henderson back into his starting XV. Ian Madigan, despite his heroics in Edinburgh, can't take the number 10 jersey from Billy Burns, Alby Mathewson though does replace John Cooney at scrumhalf. The Jacob Stockdale fullback experiment seems to be at an end.

Victory for Leinster would make it a quarter of a century of games unbeaten. With potentially three games to go in Europe, their run could stretch to 28.

In 14 meetings dating back to the 2014-15 season, Leinster have beaten Ulster 10 times with Ulster winning four. The two provinces have met in the Pro14 (Pro12) final once before – Ulster topped the table in 2012-13 but were beaten 24-18 by Leinster in the competition’s showpiece. Ulster’s sole Celtic League victory came in 2005-6, as they finished one point ahead of Leinster at the top.

A tale of two semi-finals

In his column this week Gordon D’Arcy has been damning of Munster and their tactics in the semi-final defeat to Leinster, but he has praised the pragmatic leadership of Dan McFarland at Ulster.

He writes: “Right now though, McFarland is streets ahead of Van Graan. At half-time in Murrayfield they were in a similar state of inadequacy. McFarland separated himself with a big decision that took control of Ulster’s destiny.

“The coach put the entire campaign on his back by pulling off Ulster’s best player of these past two years. John Cooney has been out of sorts since the restart but he is their goal kicker, their try scorer from anywhere and so much more besides. . .

“The Ulster fan has grown accustomed to beating off all-comers at home before coming up short on a tricky road trip. That the halfbacks McFarland signed this summer produced the goods to set up a Pro14 final against Leinster in Dublin this Saturday night shows us a coach who knew precisely where his team needed strengthening.”

Andrew Brace will take charge of proceedings in Dublin on Saturday. The Welsh ref is only 32-years-old.

A deluge pre-kick-off made handling difficult for both sides in last week’s semi-final between Leinster and Munster. A sunny, clear day is scheduled for Dublin on Saturday, with temperatures reaching 17 degrees.