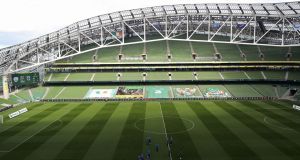 Ireland will play three of their four matches in the upcoming, one-off Autumn Nations Cup at the Aviva Stadium, all three of which are expected to be screened by RTÉ and Channel 4, but The Irish Times has learned that their sole away game, against England, is likely to be shown exclusively on Amazon Prime.

The hastily arranged eight-team tournament, which is being run by the Six Nations and will also feature Georgia and Fiji, is to help partially fill the substantial financial void left by the lockdown, an absence of paying spectators since the resumption thus far and the cancellation of the traditional November tours by the southern hemisphere teams.

Selling the TV rights for the games on the UK mainland to Amazon will also soften the blow of Japan not being able to take part, and thus opening up the tournament to the lucrative Japanese TV market after the success of last year’s World Cup.

Georgia have replaced Japan after the 2019 World Cup hosts were forced to withdraw because of logistical complications arising from Covid-19 which, apparently, has so far even prevented their New Zealand coaches from re-entering Japan.

It remains to be seen if there will be a title sponsor, per se, or whether each country will have their own sponsor for home games, a la Ireland’s Guinness Series in ‘normal’ Novembers. It also remains to be seen whether spectators will be admitted to games, even in much reduced numbers.

Ireland, who have been drawn in a group with Wales, England and Georgia, will kick-off the 2020 Autumn Nations Cup against Wales at the Aviva Stadium at 7pm on Friday, November 13th. The following Saturday, November 21st, they will face England at Twickenham (3pm), where they lost in the Six Nations in their last outing by 24-12 in February before the coronavirus pandemic suspended the sporting world.

Ireland will return to the Aviva Stadium on Sunday, November 29th, with a game against Georgia and then, depending on their final ranking, will host the team which finishes in the same position from the group containing France, Scotland Italy and Fiji on Saturday, December 5th.

The groups and fixtures were in part designed to avoid any repetition of the 2020 Guinness Six Nations, of which four postponed games have been re-arranged for late October. Ireland host Italy on Saturday, October 24th in the first of their two rescheduled games and are then set to belatedly conclude their 2020 Six Nations schedule against France in Paris on October 31st.

All of which confirms the unprecedented and hectic schedule awaiting many of Ireland’s frontliners who, starting a week after the 2019-20 Heineken Champions Cup final, will thus play six Tests in a seven-week window which will conclude a week before the 2020-21 Champions Cup commences.