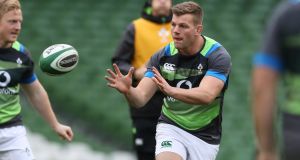 Leinster stocks are so abundant this weather they could afford to send a gang of heavies down to Carton House yesterday to antagonise the Irish pack.

There are 12 Leo Cullen players donning green against Argentina tomorrow while Dave Kearney, Robbie Henshaw’s hamstring and Jack McGrath’s form or body or both brings that number up to 15.

Garry Ringrose and James Lowe are due to travel with the squad to Treviso next week.

The squad was improved by the return of two tightheads Michael Bent and Andrew Porter from Ireland camp. Their roles have been reversed as Cullen has consistently preferred Bent over Porter. Maybe it is a case of making the 22-year-old complete his apprenticeship.

Jordi Murphy swaps the green number seven for blue but Jack Conan must be content with a bench slot, probably because he was held down in Carton until muscled off the Ireland bench by Rhys Ruddock.

That means Max Deegan gets another opportunity at number eight.

Other interesting selections see Ed Byrne start at loose head prop ahead of Peter Dooley in the healthiest position in Ireland right now. As McGrath is learning, a Lions tour can be career defining and a curse in equal measure.

The Dragons coach is struggling to turn water into wine since arriving from Grenoble as the traditionally weakest Welsh amalgamation has only two wins from eight games, leaving them second from last in Conference B.

Leinster’s win ratio reads the opposite. Hard to see anything but that gap widening even considering the absentees.

Oh, and Gavin Henson is playing. That used to be the first rather than last line.