Adam Byrne and James Ryan to start against Argentina

Robbie Henshaw misses out due to hamstring injury, he’s replaced by Chris Farrell 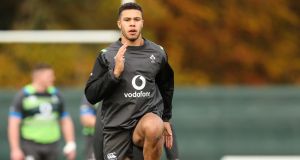 A hamstring injury to Robbie Henshaw sees Chris Farrell come in for a second cap alongside Bundee Aki in the new look Ireland midfield to face Argentina this Saturday at the Aviva stadium (kick-off 5.30pm).

“Robbie has a slight hamstring strain,” said Schmidt. “At a push he could have been involved but it should see him fine for the busy period coming up.”

Farrell made his debut at outside centre in the 23-20 victory over Fiji last Saturday. The Ulster reared 24 year-old returned to Ireland this summer, joining Munster, following three seasons in the Top 14 with Grenoble.

Adam Byrne’s imminent debut on the right wing ahead of Andrew Conway makes this the biggest backline ever assembled by Joe Schmidt or any Ireland coach.

“With a bit of experience in that backline around him I am really hopeful Adam will get a good hit out in an Irish jersey.

“But,” Schmidt added, “between four of the five outside backs they have five caps between them.”

Aki packs a 100kg punch at inside centre, putting Kearney in the unfamiliar situation of being the smallest player in the back field at a mere six foot one and 95kg (14 stone 13 lbs).

Seemingly, Jack McGrath’s Lions hangover continues as the heretofore established Ireland loosehead prop misses out on the match day squad yet again as Cian Healy wins a 73rd cap with Munster’s Dave Kilcoyne on the bench.

Devin Toner is retained in the squad but a glimpse into the future is provided by James Ryan being paired with Iain Henderson in the second row.

Ryan captained Ireland to the Junior World Cup final in 2016 and Schmidt capped him against the USA last summer before his Leinster debut in September.

“I thought his entry into the South Africa game was really positive. He’s a good athlete James, commits fully to the task, he’s an intelligent young man who has adapted really well to this level thus far.

“We’ll know a little bit more after this game, that’s what this period is all about.”

Peter O’Mahony concurred: “Young fellas these days are quite big. He’s a big man. Intelligent but, as Joe says, he gets stuck in when he is asked to.”

Munster tighthead John Ryan has recovered from a calf injury to provide cover for Tadhg Furlong as Andrew Porter benches for Leinster, against the Dragons at the RDS on Friday night, alongside Jack Conan.

Ian Keatley, as expected, is retained as sub outhalf as Joey Carbery suffered a fractured wrist against Fiji. Luke McGrath is also retained in the squad ahead of Kieran Marmion as cover for Conor Murray.

Regarding the return of Marty Moore to Irish rugby, to Belfast not Leinster, next season Schmidt said: “It was disappointing to him go (to Wasps). I know he was disappointed at the time and contacted me to express his own frustration the way things have panned out. I’ve stayed in touch with Marty and it will be good to see him back at Ulster. He has had two starts this year and about 200 minutes.”

The Leinster tight head props Moore left behind him, Andrew Porter and Michael bent, have played 209 and 290 minutes so far this season.