‘I like this game, it is physical. If I didn’t love it, I would have played something else’ 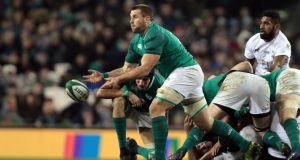 Ireland’s CJ Stander acts as scrum half during their Test win over Fiji at the Aviva stadium. Photo: Paul Walsh/Action Plus via Getty Images

A cameo role as Ireland captain last week has drawn CJ Stander into a different arena within the Irish team. From a distance he has been the dynamic, bustling Afrikaner with the big heart that has made his push through the Irish residency door all the more welcome.

Brawny and physical, maybe Stander had been pegged as a battering ram more than a brain’s trust. But like Rhys Ruddock, Johnny Sexton or Rory Best, he has earned Irish coach Joe Schmidt’s recognition as officer class.

Maybe more than that, Stander’s stand-up exuberance on the pitch, like that of Sean O’Brien, reflects a team character. The often well recited group-think from the camp is rarely a glimpse into the soul of the Irish team. But Stander’s passion and eagerness is the unspoken word that Argentina is not “just another test match.”

“I like this game, it is physical,” he says of rugby. “If I didn’t love it, I would have played something else...

“I like going onto the pitch. I like where everyone is working towards one goal, the collective. You put your head down. You work hard. If you get the result it makes it more enjoyable and if you don’t get it, so long as you work hard and work for the team, the aches and pains will all be worthwhile. I like the game, it is physical.”

The arm wrestle with Fiji will put Ireland in a firm frame of mind for the challenge of Argentina. Although they had dropped below the islanders in the rankings, they are now above them at ninth in the world after their 31-15 win over Italy.

Schmidt will get down to the Argentine nitty, gritty during the week. But there is some straightening out to be done first. In that the venting of the Ireland coach after Fiji was more surgical and less the Michael Cheika styled wall of noise.

“It was pretty similar to what he (Schmidt) normally says, he goes straight in and tells you what you did wrong and what you did well,” says Stander. “And he tells us to be switched on going into next week. We did a lot of great stuff and congratulated the new caps. That was it.

“I’ve known him for a few years now and you never know (if he is pleased or not). He’s baseline. That’s the way we know him.”

It throws up the stark image of a Schmidt laboratory in Carton House, the players and their errors mounted and graded like an entomologist’s collection of insects, Argentina similarly pinned in another case.

“I haven’t looked at the rankings in a long while,” says Stander. “They (Argentina) play in the Rugby Championship. They play huge Tests every year and when you play the big three (Australia, Springboks, All Blacks). It gives confidence and you can learn so much from those games. And the Jaguares are together all year as well.

“They have experience and continuity of being with the Jaguares. We have seen a few of their games but we are looking forward to another physical battle.”

He is asked if the team should entertain more, if the way Ireland plays the game takes into account the paying customers. He is asked if the Mexican wave that erupted during the game with Fiji was an expression of wavering concentration on the part of the spectators and if the players needed to do more to capture their undivided attention.

The question prompts a caveat from the IRFU. The middle game of the series was sold to many more families and children than usual and was a sell out. Many of the tickets were bought by fans, who may not have regularly attended international matches but because of the availability and competitive pricing did so on Saturday.

Stander is unapologetic. If the players take their eye off winning, they have already lost the match. In addition, he says, people understand their rugby. They know what they are watching, are aware of why the team is playing in such a way.

“It does not matter if it is a fast or slow game. They are going to enjoy it,” he explains. “I don’t think it is up to the team. The enjoyment also comes from the win. That is what they want, boys to perform their best when they put on that jersey.

“If you put yourself out there to go and entertain then you are not going to focus on your team and you can be in a wrong space sometimes. We go out to try and win a game. Then I know people are going to enjoy it.”

It’s painful to ask him the question. His style is entertainment. It’s in his bones. Argentina will be his stage.

1 Garry Ringrose to stay with Leinster as he signs two-year central contract
2 Dr Claire Molloy: ‘It is a privileged place to be, on the frontline’
3 Seán Moran: What nostalgia tells us about how the GAA sees itself
4 Rory McIlroy admits Portrush nightmare was catalyst for his return to the top
5 ‘For 25 minutes I ran out of oxygen’: Pepe Reina on his coronavirus battle
Real news has value SUBSCRIBE

Seán Moran: What nostalgia tells us about how the GAA sees itself 06:20
Six Nations rugby needs to be protected for terrestrial TV 06:00
Dr Claire Molloy: ‘It is a privileged place to be, on the frontline’ 06:21
My favourite sporting moment: Game, set and couch as Borg takes down McEnroe 06:29
Garry Ringrose to stay with Leinster as he signs two-year central contract 06:23
Here is your handy guide to sport on television this week