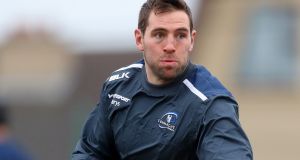 Connacht’s Craig Ronaldson: he is out of action with a calf injury. Photograph: James Crombie/Inpho

The 25-years-old, who arrived in Galway a week ago, is fit and ready to play, and with several midfielders sidelined through injury, and Ireland’s Bundee Aki not available, Connacht could spring Ahki from the bench at Arms Parks.

“He’s certainly in contention for the squad, “says Connacht’s defence coach Peter Wilkins. “He trained last week while the boys were having their down time, and we’ll see how he goes this week.

“It might take a couple of weeks for him to be fully up to speed, but that said if someone is a good player you want them around, and we are excited by what we have seen of him. He looks like a real exciting player, an explosive athlete with good skills.”

Craig Ronaldson (calf), Peter Robb (hip), Stacy Ili (shoulder), Rory Scholes (appendix) and Cormac Brennan (shoulder) are all out of action, leaving only regular midfielders Tom Farrell and Eoin Griffin, who is just back this week after a hamstring, available. However there is an improvement in the the back row options, with both Jake Heenan (knee) and the in-form Eoin McKeon having returned to full training this week.

After a two-week break from the Pro 14, Connacht now face Cardiff and Zebre in two away fixtures which will have a huge bearing on Connacht’s Pro 14 qualification hopes. A solitary point separates Connacht, currently fourth in Conference A, from Cardiff.

“It is stating the obvious that the next two games will have an enormous impact on our league position in the conference,” says Wilkins, “so this is a chance to put some distance between the top four and those immediately below us at this point. In context of the league, it is an enormous two weeks coming up.”