Clash with Ireland comes at the end of a long, gruelling season for hard-pressed panel 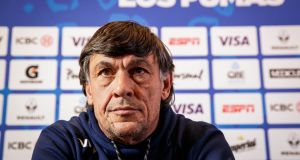 Argentina coach Daniel Hourcade: “The top teams, you only surprise them once. Now it’s harder. That is our challenge.” Photograph: Ryan Byrne/Inpho

By rights they shouldn’t really be on the same pitch much less hoping to beat Ireland.

Argentina always have to battle the factors of geographical isolation and thin playing numbers. Overcoming those natural barriers says as much about their motivation and natural ability as their chances of winning on Saturday.

Coach Daniel Hourcade raises his eyebrows and nods a weary sort of grin. Today is about flattering Ireland and his particular praise is reserved for Joe Schmidt.

But the tone of his voice, even through the Spanish interpreter, brings Sisyphus to mind, who has pushed the rock up the hill only to watch it roll down and then must start all over again.

Reality is the word Hourcade uses. He is past the fighting, or the wishing and has become the pragmatist. He has little choice.

“We have only just started (in Super Rugby), two seasons, and we only have 34 professional players,” he says.

“Our problem is not the amount of players we have, it’s the competition we have. We only have one tournament with one team so few players can develop at the top level. We would be better to be in the Northern Hemisphere but we are not allowed be there.”

Remember the debate before they fell in with the Southern Hemisphere and The Rugby Championship and Super Rugby. There were more Argentina players in Europe than anywhere, yet the Six Nations, protecting their patch, wouldn’t open the door.

So, in 2015 Argentina created the Jaguares, a professional outfit based in Buenos Aires, which became the first Argentine team to play in Super Rugby.

This season, lead by Argentina captain Agustin Creevy, the Jaguares played 15 matches and won seven. Using the same group of players, Argentina lost six from six in the Rugby Championship against the All Blacks, Springboks and Wallabies. The 11-month schedule, says Hourcade, is, well, challenging.

“That’s probably one of the biggest problems we have,” he says. “Last season we travelled 186,000km, so probably four times around the world. We’re used to that and it is our reality.

“We want the competition to play week-by-week and that is what we want and we are really happy about that. We need three or four teams,” he laughs.

Tough as it might be Argentina are not ones for playing the crying game and this week make three changes. Two of those changes in the backline see Matías Moroni come in for Matías Orlando with Ramiro Moyano taking the place of Sebastián Cancelliere on the wing. Up front, Juan Manuel Leguizamon makes way for Tomas Lezana in the second row.

Veteran outhalf Juan Martin Hernandez will not make the pitch because of a knee injury so Nicolas Sanchez, who kicked nine out of 10 attempts during the 2015 World Cup quarter-final match against Ireland, starts.

There is a mischievous undertow to Hourcade’s narrative, although there is also the odd gem of candour. Ireland, although they may win, will not surprise him about how they go about doing that.

“We study Ireland,” he says. “Against South Africa they played one team; against Fiji they play another one. They probably played the same way in the two games.

“Perhaps Argentina have a stronger change in the way of playing. Ireland is progressing a lot but always under the same idea of a style of play.

“Probably two years ago you were surprised at the way we started playing. Perhaps nobody expected Argentina to play the way we had done. But to the top teams, you only surprise them once. Now it’s harder. That is our challenge.”

Ireland’s scrum, their set piece, their coach are all good, he says. All very strong. All a challenge. Ireland are one of the hardest teams in the world, he says – all without much alarm in his voice.

The fear comes when he is brought back two years. Hourcade doesn’t want to dwell too long in that past. The Argentina team, within limitations, has been transformed and wishes to look forward.

“For us it was a really huge challenge to change our style of playing without losing our passion, our traditional Argentinean values and that was why it was so important for us [at the World Cup],” he says.

But without saying a word he flicks his hands open, then adds, without qualification or explanation: “This is a completely different team”.

Daniel Hourcade and Joe Schmidt. Together telling much and giving little away.